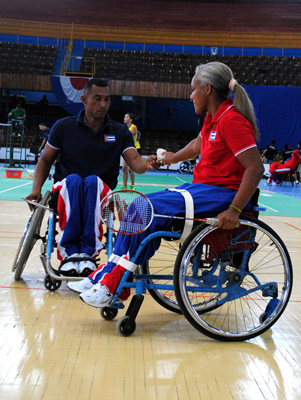 They gave us our uniforms at the National Center for the Disabled. The jerseys didn’t have our names on them, but that didn’t matter. It was there that, the following day, they gave the team the flag, in the presence of the Chair of Cuba’s Badminton Federation, the National Sports Commissioner and the National Organization for People with Disabilities, the entity that was representing us, plus the National Sports Institute (INDER) liaisons assigned to us.

Following this ceremony, a meeting was held to discuss a number of concerns among team members, including some having to do with our wheelchairs. The ones we have, the ones we’ve been using our whole lives, aren’t exactly suited for competitions of this nature, as they are not of the required quality (they are heavier and slower than those used for sports).

We also had questions about the payment, training hours and transportation to and from the venue. The answers we got made us feel frustrated and even cheated. Even though this was an international sporting event, we weren’t going to receive any kind of incentive, not even if we won medals.

We know this was because the sports authorities knew very well that the foreigners who’d be competing at the tournament (from Brazil, Suriname, Colombia, Chile, Peru and other countries) were experienced and skilled badminton players, and that no one expected us to get any good results. But, even though we were new to the sport, we set out to give our best and to play well.

The opening ceremony was simple but nice. The qualifying session was stressful, as whether one played on or not depended on it. Those responsible for assessing our performance were judges from Spain, Canada, Switzerland, China and other countries. 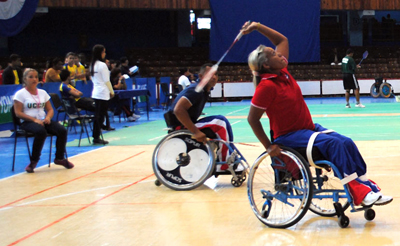 Owing to fuel shortages, we were the first to be dropped off (at dawn) and the last to go home (at night). We had very little time for rest. Something that bothered me a lot and I never did manage to understand was that, on the first day, Cubans and foreigners were given the same kind of food but, on the following days, the food for the two was of different quality.

Interacting with the foreign athletes was also uncomfortable. They had warned us we couldn’t ask them for anything, but it is a tradition for athletes to exchange jerseys. Those monitoring us reproached those who they considered were “hustling” foreigners. A Brazilian who talked to me about his son’s passion for soccer got very upset when someone approached me to remind me how to be “well mannered.” The athlete told the person the jerseys were his and he gave me two for my son.

Here’s a funny anecdote: some wanted to try out our wheelchairs, as though these were artifacts from the distant past. We didn’t miss the opportunity to try out their modern and light-weight chairs. As we moved about, it felt as though we were traveling forward in time at a breathtaking pace, but in a direction opposite to the place they had come from.