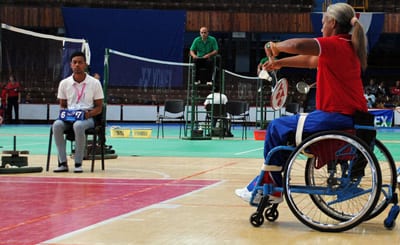 HAVANA TIMES— Held at the close of last year, Cuba’s second National Badminton Festival aimed to broaden the participation of people with disabilities in the sport. In this connection, competitors showed better training and a greater number of people from other provinces took part in the event. The organizers – the National Sports and Recreation Institute (INDER) and the Cuban Association for the Physically Impaired (ACLIFIM) – took care to ensure proper lodging, food and other conditions for participants.

What remains a cause for concern, particularly because this situation seems to repeat itself, is that, despite insistence from ACLIFIM, INDER continues to neglect the fact that we are people with physical challenges (some of them severe).

In Havana, for instance, only three athletes with disabilities participated in the tournament, when, in fact, eight of us should have. Five refused to participate for a very simple reason: they had to travel from their province to Havana on a train. This involves being locked up in a wagon without even the most basic conditions for fourteen to sixteen hours. A paraplegic or someone with a medullar lesion cannot go on such a journey without suffering dramatic health repercussions afterwards, to say nothing of the fact that, after so many hours of discomfort, one’s performance isn’t the same.

One of the benefits of being an ACLIFIM member is a 50 percent discount on any type of transportation, so the price of the ticket wasn’t a problem. A mere 72 hours before the festival started, they authorized us to travel by bus, but, by then, only those of us who had said yes initially could attend.

The team included a child who turned 11 during the tournament and, despite his condition, had always played on his feet. Suddenly, when the qualifying rounds prior to the competition were held, he was asked to play on a wheelchair.

He only had a few hours to adapt to this new instrument and, despite this, he came in second in a category where he was pitted against adults about twice his age. The other athlete also finished second in the “standing” category, one of the most difficult. The other was a woman who won a gold medal in the wheelchair category.

Despite the inconveniences of the trip, the team came in fourth in the country. Perhaps, with a less traumatic means of transportation, the result would have been much better.

The way they justified this, which proved so out of step with the enormous effort athletes and organizers make, is that, since it was close to New Year’s, there wasn’t enough money to finance the means of transportation we required. But that is absurd, because the festival had been budgeted for under the yearly plan, in other words, it was safe to assume money had been set aside for it.

Couldn’t the organization have prioritized the rental of a special bus that could lift wheelchairs? These buses are available in all provinces, so it wasn’t a question of resources but of bad management.

Incorporating people with disabilities into the world of sports is going to remain difficult as long as these things continue to happen. Those who are already involved in sports also become disillusioned if they feel their rights and needs aren’t being respected.