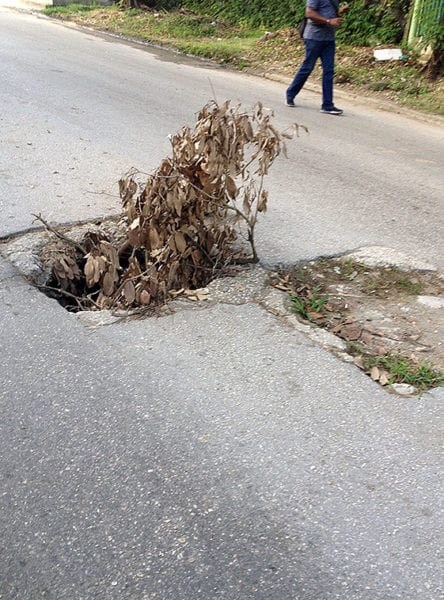 HAVANA TIMES — In the Guiteras neighborhood, right on 19th street and Casa Blanca Ave., there is a pothole which continues to exist and literally seems like it has been cut out by a human hand.

Everyone who travels there every day can give testament to my words.

It started off like every pothole does, small, but with cars, trucks and buses constantly going over it, it grew until it became what it is today, a big pothole.

You will be asking yourself what makes this pothole so special given the fact that Havana is full of them. Well, in this case, neighbors themselves and even one or two passers-by have tried to fill it. It was filled with soil and rocks a while ago, so that you could travel over it, although it went back to being the same hole as months went by.

It has been used as a plant pot and has become a traffic sign. Tall bushes were planted in it, as if it were some kind of clay pot. The plants were tall so that they could be seen from far-away, preventing vehicles from falling into it. All drivers go around it either to the left or right, no matter how fast they are going.

Buses that travel towards the Guanabacoa and Bahia bus terminal go down this road. As do state-owned vehicles, including all those that travel to municipal offices. I imagine that an official or someone with a position that influences it getting fixed, has traveled in one of these vehicles at some point.

It’s not just me, I have heard the opinion most people who go past this place have and their surprise, helplessness and the complaints grow just as the pothole does. “Unbelievable”, “it’s a lack of respect”, “nobody is interested in that”, are the things you hear. And then what?

As well as disfiguring the public aesthetic, it’s a potential hazard, especially at night when cars only realize it’s there when they are already on top of it.

We Cubans having financial problems in getting asphalt and the vehicles that are needed to fix the city’s roads is no secret. However, such a dangerous pothole shouldn’t exist because it can hurl a bus against pedestrians.

Until when? What are they waiting for? For an accident to happen? It needs to be covered with cement, asphalt, anything. Or is the US blockade also to blame for this pothole, which is used as an excuse to cover up our own shortcomings. This is clearly a problem of indifference in the face of a situation which could hurt everyone.

There is an empty slogan which is repeated a lot here: “let’s make our city more beautiful and loved.” With a pothole like this one, I’m certain we’ll never achieve that.

2 thoughts on “Monument to the Pothole or Potential Hazard”