HAVANA TIMES – Last Sunday, when sitting down to drink a cup of coffee in my backyard, enjoying the fresh morning breeze and my plants, I heard a sound I hate: an axe or machete cutting down a tree.

I stopped thinking, put my cup of coffee down to one side and went to the end of my backyard. There was a man right next to my house, up against the fence that cuts my yard off from my neighbor’s. He was wearing a mask and climbing up a tree, while cutting it with a machete he had in hand,

It was a very old tree that had never bothered anyone. It is known here in Cuba as the Sassafras tree. It’s delicious scent gives away its medicinal properties. It is used to fight colds, respiratory diseases such as pneumonia etc., and is consumed as a brew or infusion.

Cutting down a tree with so many healing properties because a neighbor is bothered by its leaves (which are blessed) is a cruel and irresponsible act I believe, even more so during the times we are living in, when nobody knows whether Nature might have the cure.

I drew closer and spoke to the man who was climbing the tree and committing such a brutality. I asked him why he was doing it. He told me that it was bothering two neighbors, who had paid him to do it.

Then, I asked him to throw all the branches he wanted into my backyard so I could plant it someplace where it wouldn’t bother anyone and to carry on the species. Things like this are happening because of uncontrolled population growth in Cojimar, on the east side of the Capital. I would like to issue a warning that Cojimar is being invaded by people who build anywhere they like, and once they have put their houses up, nobody can get them out. As a result, Cojimar is being left without hills and native flora and fauna.

Here are some photos of the Sassafras crime, and if you know of another name for this tree, please comment as I would really like to know. 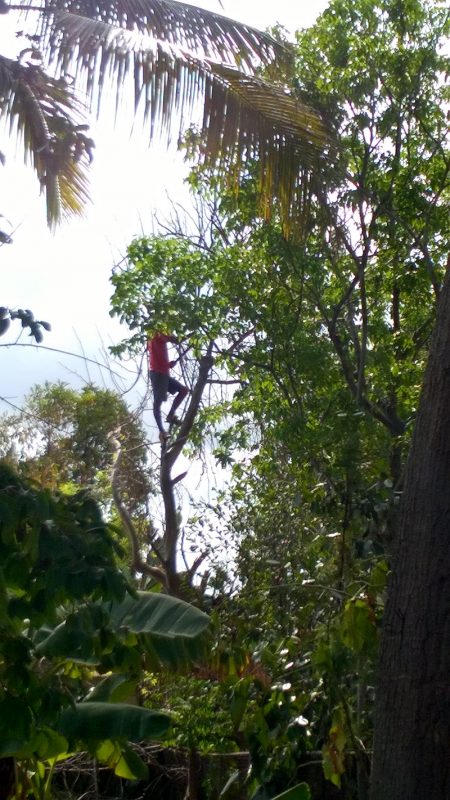 2 thoughts on “The Murder of a Medicinal Tree in Cojimar, Cuba”