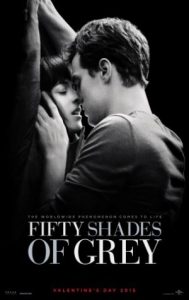 HAVANA TIMES — From what I’ve read in a number of international magazines that reach me thanks to Cuba’s popular “weekly package”, the film adaptation of Fifty Shades of Gray has been a box office hit in more than 11 countries and taken in around 212 million euros. I’ve also read that it’s been censored in several parts of the world (though I still don’t understand why).

I admit that, after being flooded with information about the film and hearing so many rumors about it, I was rather anxious to see it, particularly because I’ve always been interested in the issue (I don’t practice any form of sadomasochism, but I find the whole matter interesting).

A few days ago, I was able to watch a film copy of 50 Shades of Gray. From what I understand, it is part of a trilogy which will be adapted for the screen in three parts (though I’ve also read that there was talk of not filming any sequels).

I was a bit glad to read this last rumor, because the story as such struck me as slow, boring and anything but sensational. I believe that, as far as the issue of sadomasochism is concerned, the film didn’t show anything that any simple mortal didn’t already know. Everyone knows that the sadist may use whips, leather attire, masks and a long list of other items to inflict fleeting or long-lasting pleasure or pain on their partners. It is quite simply a means of obtaining pleasure through cruelty or domination, and it is a phenomenon that exists since antiquity.

I’ll be honest: at no point was I excited by the film, and it is even harder for me to understand how it has managed to make so much money. I suppose it has to do with the disproportionate press it’s gotten and the way it is being promoted and sold as a hot movie, bordering on the pornographic.

I have read quite a bit about it, to the point of being sick of this rather lame movie.

I would have liked to see more, and when I say “more”, I am not referring to frontal nudes or explicit sexuality – I mean more of a story, something in terms of content that was more attractive and didn’t put me to sleep (the only thing it inspired me to do). I now know that, whenever I can’t sleep, I can always put on the film so as to fall into Morpheus’ arms (as long I’m not falling to the arms of Gray, a guy that struck me as a very bad lay). I prefer Titanic, to be honest. Even though it’s a bit too long for my taste, at least that film delves into the love story more deeply.

What do you think?