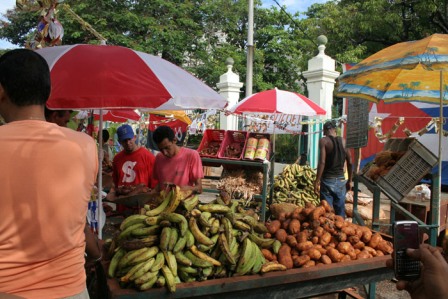 The “plaza” in my neighborhood —where the State sells its agricultural products— has more rallying power than Havana’s Revolution Square itself.

It might seem like an exaggeration or a joke, but people no longer turn out at those mass rallies on their own.  They’re pressured to attend for fear of losing their jobs or their positions, or not being able to later get the “revolutionary references” that are always required when seeking new employment.

Contrastingly, when one hears a voice outside yelling “there’s bananas at fifty cents a pound in the plaza” or “they brought in some really big tomatoes,” that’s when everybody grabs a plastic bag and heads out running to buy whatever they can.

Low-cost and good-quality food is something strange these days.  People are a little bored with so much revolutionary sloganizing and such little amounts of food and staples.

They blame the very same ones who call those rallies for all the woes suffered by our society. I don’t want to sound one sided, but they have good reasons.

Our plaza with the State-supplied products arose at the end of the 1990s because the State-run markets that had previously existed (before the ‘90s) had effectively turned into private markets amidst the economic crisis and the food shortages.

There’s less of a selection in the plaza, but it’s cheaper.  Likewise, the quality of its produce is lower, but still acceptable. The plaza in my neighborhood is one of the best I know of.  It always has at least three or four different products.

We still lack the means and organization to farm our land efficiently, despite being a country that depends on it.  There are many barriers, sometimes ones that are human, of people’s will or mentality – factors that are hampering our development and which make the panorama look worse.

My father says that there aren’t enough trucks to transfer produce to the city, and that farm work is difficult; this I’m certain of.

A few days ago they were selling bananas in the plaza for 2.50 pesos a pound (about 10 cents USD).  Although it might seem cheap, it was too high a price given our incomes (averaging $20 a month), which is why almost no one bought any.

The fruit began to ripen and soon started to go bad.  Then —and only then— they began selling the produce for a half peso. It was then that everyone began buying them until they sold out.

It didn’t matter if the bananas were in perfect condition or not, because they were making up for the shortage of rice.