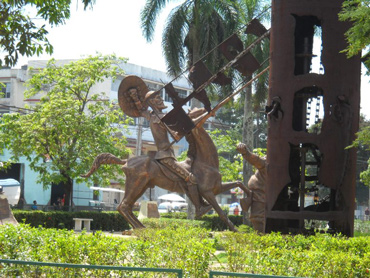 HAVANA TIMES — Four years ago, I published a diary entry titled Holguin: My Father’s Home Town. In it, I reminisced on my last trip to the east-laying province, in the 80s. I recall having broadly described my impressions from then and how it pained me that I hadn’t visited my family for a long time.

In that post, I pointed out the differences between the Holguin I had then visited and the capital, the differences that my childhood perceptions and memory allowed me to recall, twenty years later. Four years later, I have fulfilled my dream of returning to Holguin, and a province like the one I recall, but different, welcomed me.

It is once again time to share my impressions, which remain superficial, for twelve days do not suffice to deeply explore the different aspects of a society like Holguin’s, let alone its hospitable, friendly and communicative people, or its women, whose beauty finds no parallel anywhere else on the island. The people of Holguin are proud of themselves. They are polite, happy and organized.

Rum, pork, baseball and the neighborhood lottery are intimately intertwined with the popular imaginary and daily life.

Holguin is an enormous province and I was unable to get to know in its entirety. I merely visited the provincial capital and Baguanos, where two of my uncles live in humble wooden homes. These comments apply only to those places.

Neighbors tend to be very close. The tightly-packed houses at the outskirts of cities encourage this. Holguin is a city of stark contrasts: some families live in luxurious homes, while others conform themselves with hovels.

Not everything is rose-colored there. Most people have to work hard and come up with ways to make it to the end of the month. The most shocking thing for me was seeing the state of the roads in peripheral neighborhoods like La Aduana, where I spent the night with my family, and what these “roads” look like when it rains.

Many details evade me. The exhaustion caused by the bus ride, the emotions stirred up by reuniting with my family after 29 years, and the limited space I have, force me to leave out a number of impressions and concrete aspects of my experience. Perhaps in May, when I go back to Holguin, I will be able to enrich my observations.

One thought on “My Return to Holguin, Cuba”