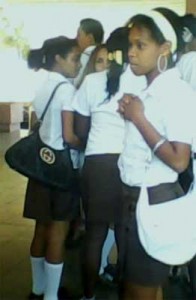 HAVANA TIMES — The Lazaro Pena Polytechnic School in Guanabacoa where I teach has gained the reputation for being one of the high schools with the most violence among students and teachers alike, and this refers to physical as well as verbal violence.

For teachers who venture to work there, the educational system becomes truly hostile. The law, like in the jungle, is simple: if you’re incapable of violating other people’s rights, yours will be violated.

On Friday, May 11, Spanish teacher Belkis Olivera Cedeño, who dubs herself “the sweetest in the school,” had to resort to the law of the jungle with a student so as to not be made to look like a fool in front of her classroom of students.

That fact doesn’t justify anyone doing what she did, but it was the only way out that she saw before the defiant attitude of the 15-year-old student. In fact, her pulling the student’s arms led only to more violence.

After the next class began, teacher Yasser Quintana saw fit to show off his authority as the homeroom teacher of the group. He went with the student in the department where the aggressor was, with the rest of the teachers from the humanities faculty, and that’s where her vigorous defense began.

The 22-year-old man raised his voice in front of everyone, directing his anger at the woman. “This better be the last time that you…!” was the beginning of the litany of phrases he began to swear.

After this warning the teacher apologized to the student, but she didn’t receive the same in return.

Like our daily bread, violence at this school doesn’t screw up the school environment. Minutes after the scandal, everything was like some bit of gossip that the teachers laughed about for a while.