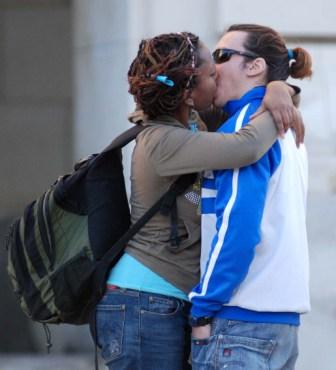 JOSUE:  One of my two best friends says that since he began his current relationship with Deney, she has never been unfaithful to him; nor has he been tempted to cheat on her.  She has offered him “what no other woman has,” he told me.  However he didn’t miss noting my astonishment, because we all know his fame as a “womanizer.”

LESLIE:  He called me yesterday, very emotional.  “I’m so happy,” he confessed, leaving me to wonder why my other good friend was feeling this way.  Perceiving my mystification, he explained that it was because of a very beautiful and intelligent young woman.  “She’s the best in years.  Today we kissed.  I think we’re starting a relationship.”

YORDANKA:  Her first months abroad were difficult.  Work left her with big gaps of time during which she felt alone and missed her family.  That’s why she wrote a lot, especially to me and our mother.  Then, little by little, her despondency started going away, and the mail and telephone calls decreased.  I think it that had to do with a person who appeared in her life.  When she returned, she told me — half joking — that she would have liked to have stayed in Venezuela.

ME:  I met her by chance.  She looked at me with her big eyes and, when returning the gaze, I knew I couldn’t leave that place without trying to meet her.  We exchanged phone numbers and since then we’ve called each other frequently.  Soon we’ll go out, which makes me feel exhilarated.

CONCLUSIONS:  It seems that with all this self-employed work that has taken hold here in Cuba, someone has been carrying out Cupid’s job – and very efficiently.