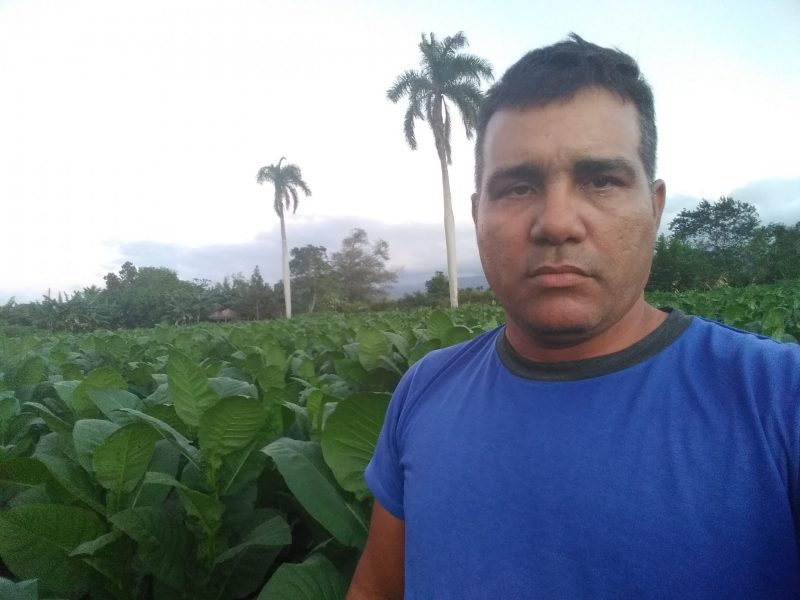 HAVANA TIMES – This season, nature has been kind to tobacco crops in Mayari, Holguin. Even though it hasn’t rained practically this year, many tobacco farmers have access to irrigation in one way or another. Whether that’s via the tobacco company, acquired “on the street” or thanks to the solidarity of neighboring farmers who do.

However, quite a significant minority still have non-irrigated land. Luckily, I have a small pump in a well for domestic consumption and I get by. Tobacco seedlings were also available in October, which is rare in these parts and partly thanks to the state company’s investment with some farmers in high-tech nurseries. As a result, early planting of most tobacco plants minimized damages because there was heavier rainfall in November and December.

Something that proves crucial for one thing is detrimental for another. If it rains a lot, crops grow well but nurseries are affected and fungus spreads which stains the leaf, such as the famous blue mold. To tell you the truth, tobacco plants don’t need a lot of water, but because they are short life-cycle crops (65-85 days depending on the type), they need to be watered regularly, and if they aren’t, then yield, the size and quality of the leaf are drastically affected. So, when tobacco farmers have irrigation systems in place, we prefer it doesn’t rain.

Excessive rain also affects drying huts. Someone who knows very little about the trade might think that leaves are protected for sure once inside the drying hut, but that isn’t true. Tobacco leaves are at the most risk, or the most skill is needed, once they are harvested and stored away.

It’s no wonder that there is a farmer’s saying that goes: “the place you need a good cosechero is on the farm.”  “Cosechero” is a synonym for tabacalero or tobacco farmer, around these parts. And it isn’t the same as a tabaquero, who is the person who rolls the leaf (into cigars), who is also called a torcedor.

Once cujes (220 pairs of leaves strung on a pole) are stringed and hung up in the hut, or drying hut, they need to be retouched a couple of times a week after 10 days, so that leaves don’t stick to each other and lose their quality. You need to carefully adjust them, putting them near each other but taking care that full cujes aren’t covered, so that some fresh air can run between them and the leaves don’t rot. And that there isn’t desajorno.

This is a term we use to describe the negative effect of overheating as a result of piling leaves up or a lack of ventilation between them. Parts of the leaf or the entire leaf suffer color and texture changes, almost always near the leafstalk, because that’s where they are most in contact in the cuje. They lose their softness and become dry, easy to break. When this happens to the entire leaf, it almost always happens to the youngest leaves, that is to say, the least mature, but it only happens if they aren’t kept well-ventilated, separated and with regular checks.

When there is too much damp because of rain on the farm, tobacco leaves need to be raised off the ground as high as possible, without heaping them together of course. The lower they are, the higher the chance they’ll be affected by mold, which is lethal when it comes to leaf quality and a blow for sale prices too. You can lose a harvest that has been great in the field just because it has been poorly handled in the drying hut or because a misfortune wasn’t dealt with in time or properly. Sometimes, you need to burn little cauldrons even, with charcoal or old paper which burn to get rid of some of the damp in the air.

However, tobacco leaves are drying wonderfully this year, as there isn’t a lot of humidity. For example, my crops grew great in the field and are now drying well. I planted ten thousand plants and I expect to produce 1,000 lbs, which is a decent yield. It isn’t a lot compared to other farmers around here, but if I managed to sell 800 lbs for the highest price on the market (2255 pesos per 100 lbs), I’ll make 16,000 pesos after paying tax (640 CUC or USD).

That’s what I need, more or less, to do up my bathroom at home, which needs fixing urgently. It’s something that can’t be put off any longer and something I had in mind when I planted this season, because it’s affected my family’s quality of life. As a result, I’ve worked really hard to make it work out this year, and I’ve even neglected my journalistic work a little. I’m hoping everything continues to go well.