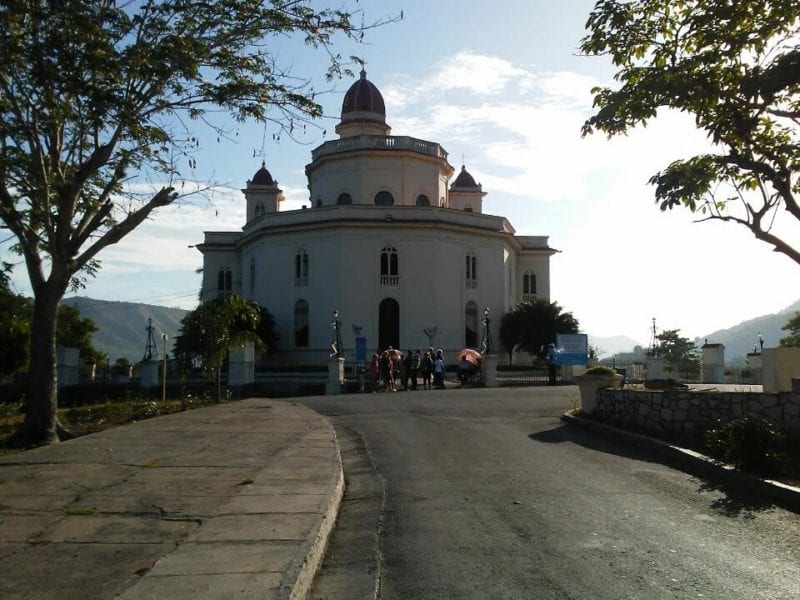 HAVANA TIMES – On my most recent trip to Santiago de Cuba, we traveled along the main highway instead of going along the Palma Soriano-Santiago section of the national highway (the only completed stretch in Oriente). A longer journey because of the zig-zagging road between mountains, with outcrops that give you vertigo, however, my travel companions didn’t want to miss the opportunity to see the Sanctuary of the Virgin of Charity of El Cobre, in that uniquely beautiful mining town.

The church is located on a hill, surrounded by houses and the town’s buildings, along asymmetrical streets, adapted to the rolling landscape. The Sanctuary’s impressive architecture stands out in contrast with the rest of the simple and modest buildings. The horizon is lined with higher mountains and you can even see the abandoned copper mines. Today, they are only exploited for gold.

Transport carrying visitors constantly arrive in these parts. You regularly see license plates from other provinces here. Tourists and the devout come from all over the country to see this place, to see the Virgin or to fulfil a vow. The Virgin of Charity of El Cobre is the Patron Saint of Cuba in Catholicism and in the “syncretic” religion too, which combines elements of Christianity with African religions. In my opinion, this is the one that people practice the most in Cuba, spontaneously.

A great staircase, which is beautiful and impressive, lead you up to the entrance. However, you can also reach the entrance along a road on the right-hand side. Everything has been perfectly built and conserved. When you get to the back side of the building, which is almost as beautiful as the front, there is a large parking lot and a very beautiful hotel for visitors that come from afar. The view is incredible. 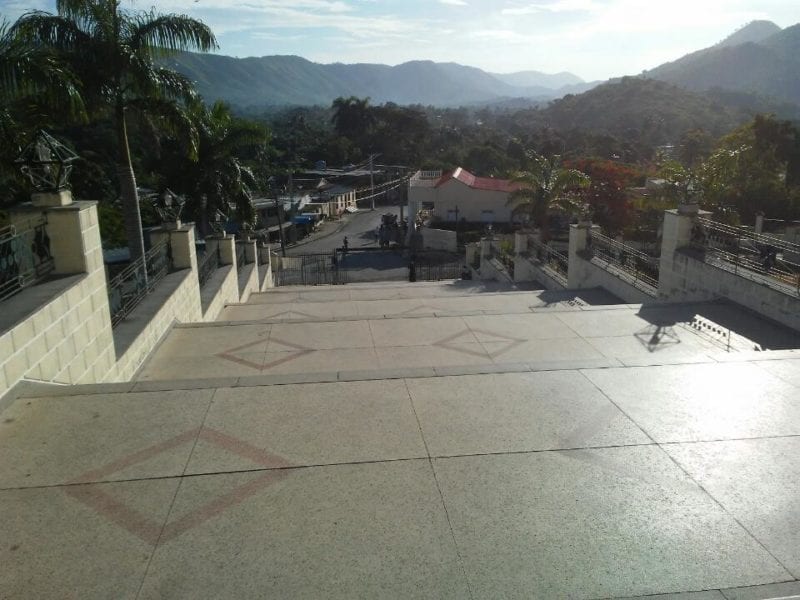 As soon as you step foot off of your transport, dozens of souvenir and handicraft sellers circle you in a frenzy. The same things you see piled up in crates along the church’s access roads, overflowing with statues of the virgin which are sold as a souvenir in every shape and size you can imagine: smaller ones, larger ones, inside glass ornaments, always with copper ore or slag.

Shiny copper ore, which is abundant in that town, is associated with the Virgin’s “power”. As a result, pieces of ore are sold as relics for 10 Cuban pesos or 1 CUC, depending on their size. Believers trust that the Virgin will keep them in mind and keep problems and illnesses away if they have these symbols in their homes.

Legend tells us that the “three Juans” who found her in the second decade of the 17th century (at least the Black slave was called Juan, I very much doubt the two indigenous men were called as such), were working in a copper mine in the Banes area and were looking for salt in a boat in the natural salt mines in Nipe bay. That’s where they found the Virgin (made of gold) floating attached to a piece of wood.

I personally believe that it came from a pirate shipwreck which were frequent in that area because of the ransom trade (smuggling). Images of saints were very common on their boats, to protect them from enemies and storms.

Then, when Spain decided to build a church at the important copper mine in Santiago de Cuba to protect them from corsairs and pirates that were after this metal just as much as they were after gold, even though a Virgin was brought over from the Peninsula, they ended up putting up the Virgin that was “mysteriously” found in Cuban waters. Which is why copper ore is linked to both the discovery and the fate of the sanctuary. 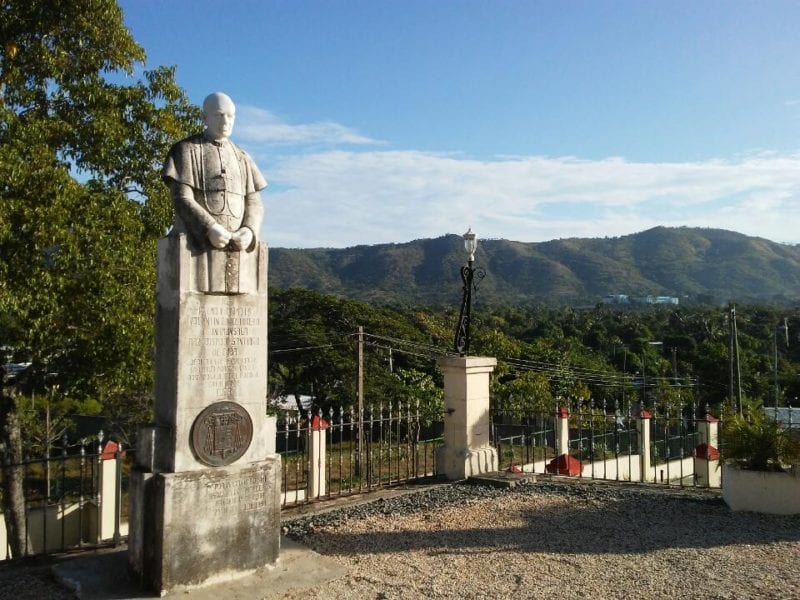 ur journey from Mayari, where Nipe bay is found, to El Cobre, to see the Sanctuary and the Virgin, is like remembering the original route the Virgin took. Only myself, an atheist, and three Jehovah witnesses who had also traveled with their children to see the theme park, didn’t believe in the Virgin of El Cobre’s “power”. The others claimed to believe and some lit candles and asked for blessings for their families and themselves.

A bunch of flowers is also normally offered to the Virgin, which hard-working locals sell. It has been noted that the town’s main industry is no longer mining now but handicrafts and business linked to the sanctuary and its visitors.

The church’s interior is stunning, of considerable grandeur. It is decorated impeccably and has been conserved very well. The altar is very beautiful, made out of extremely smooth marble and decorated in a classical style with Corinthian columns. And higher up stands the gold Virgin with baby Jesus in her arms, a small figure but luxuriously dressed. Everything is very beautiful and lit up by well-placed electric lights.

The history of the Virgin of Charity of El Cobre’s patronage dates back to our independence struggles. The Mambises worshipped her and trusted her with their lives before entering battle. As a result, a group of soldier veterans wrote to Pope Benedict XV in 1915 to declare her the Patron Saint of Cuba. In 1916, she was declared Patroness of Cuba. 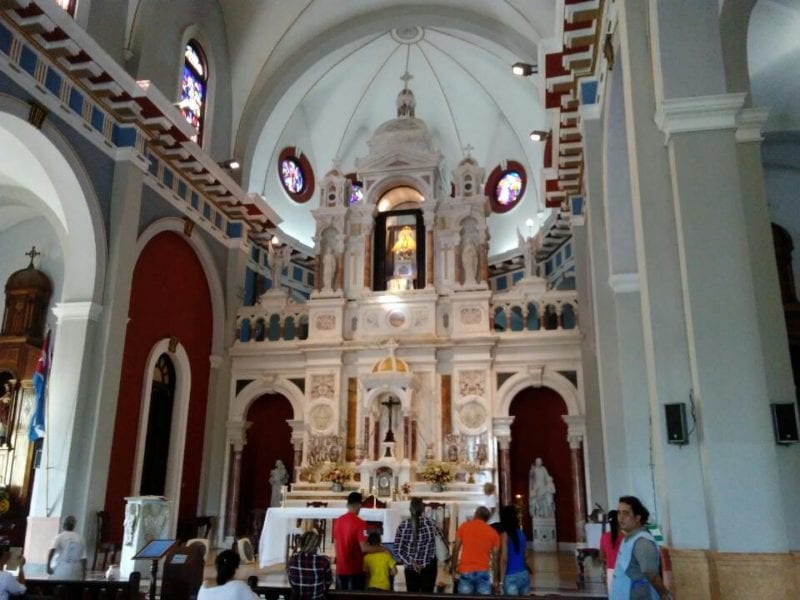 Then, when Pope John Paul II visited Santiago de Cuba on his trip across the island in 1998, he solemnly crowned her again. And when Pope Francis visited Cuba in 2015, on the occasion of the 100th anniversary of that declaration, he announced the “Extraordinary Jubilee of Mercy”.

Finally, there are many objects linked to healing the devout who have kept their promises to the Saint and there are lots of crutches. People bring them and they are put on display to prove her power. In the church’s surrounding areas, there are always people claiming to be the “Virgin’s children” and they ask for money from visitors in her name, with the bible and a portrait of the Saint in their hands, claiming they have some awful disease. There was a man who was asking for 50 pesos!

It was a very beautiful trip. It is a truly emblematic place in our country, there’s no doubt about it, and it has great historic, religious and cultural value. I greatly recommend you visit it.