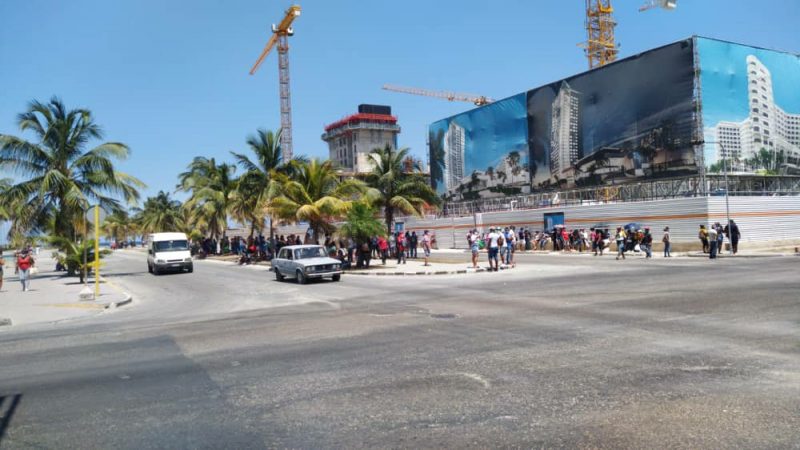 HAVANA TIMES – The new Coronavirus has put us in a tighter squeeze than before. If it was already hard to get a hold of food – read here, chicken, minced meat or anything else you can find in stores – it is even harder now because you have to stand in even longer lines.

Most of the time, you have to wake up at the crack of dawn and, those of us who don’t live near stores, have to walk a long way, kilometers, to get there and then spend several hours there, waiting for our turn to go in. Not to mention that products sometimes run out before the end of the line gets a chance to purchase.

This is the life now of ordinary people who are not only fighting to survive the pandemic that has the whole world on guard, but also to survive hunger, unsanitary conditions and so many other needs.

Taking products to the community

Ever since this situation began, the government has been taking measures to tackle the virus, especially the problems that it brings with it. Measures talked about include taking basic essentials into communities, so as to stop crowding and people having to travel long distances, to other municipalities, etc., which also results in crowding.

Up until now, everything seems to be crystal clear (or I understood so at least) that the government is assessing how to take non-rationed items to communities, as well as rationed items. Or… am I wrong?

However, it hasn’t happened, at least not where I live. My husband and I have to travel to another municipality in order to buy food because it’s very hard, for not wanting to say impossible, to buy food in our area of the capital.

Limited products are another problem. The intention is to prevent hoarding and reselling, so that the few things there are can reach the most people possible, customer protection and all of the explanations under the sun… I’ve heard it all.

I might agree with them all, but… if there are 5 or more people living in a household, where the majority are aged 60+, and only two young people can go outside to wait in line… stores are only selling the young people the amount that corresponds to them. What about the rest of the people that are staying at home? Two packs of chicken aren’t enough to feed a large family, neither are two packs of minced meat, etc.

All of the above is worrying, but the risks involved if we go outside and spend hours waiting in line is worse. On TV, they are telling us to avoid crowds, that it isn’t worth getting sick over buying one of these products. But I ask myself: what do we eat? What do we clean with? What do we wash with? Cleaning products are also in shortage, and are being sold in limited amounts at stores.

It’s a much more complex issue. I put myself in the place of those making the decisions and believe I’d lose my mind if I had to think about how to govern a country and keep it safe as much as I could in the current situation. Nevertheless, they need to rethink their distribution strategy. It might be better to ration products, and distribute them according to how many people are living in a household.

The one thing I do know is that we aren’t doing anything to fight the virus if we continue to pile up in crowds outside stores. Measures taken by the country won’t be good for anything if they aren’t upheld to the T. While it’s true that many people are walking freely down the street, I’m also sure that people waiting in line aren’t doing so out of mere irresponsibility, but NEED!