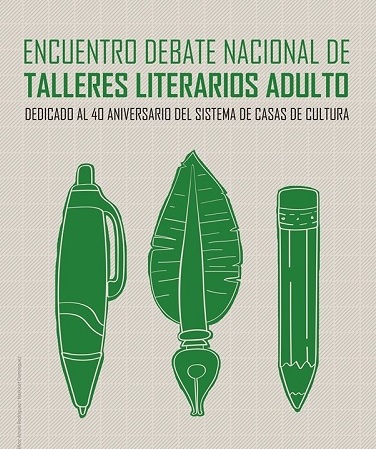 HAVANA TIMES – I woke up on June 22nd set on going to the literary workshop. I hadn’t been in over three months. The thing is, I’d distanced myself for one reason or another. However, I wanted to go that morning. When I got there, I had a surprise. I ran into Noel, an excellent poet and storyteller. Then, I found out that the literary workshop conference/debate was taking place.

For those who don’t know, these conferences take place once a year: a number of writers from the children’s, poetry and fiction for adults genres compete. You have to take three copies, one for every member of the jury, made up of renowned and prestigious writers who will assess your work, and read it before them. Afterwards, they deliberate and give the award to whomever they deem best. I took a story I had raced to finish that week, in a bout of inspiration.

I went to work and printed the copies off. I came back in a flash and went into the room where the fiction pieces were already being read. Everybody read their stories one by one. The jury made their pertinent observations and I weighed my chances. I have to say that I had a lot of faith in my story from the very beginning. It’s the best piece I’ve ever written in my opinion, at least from a technical point of view. Much better than the story “Delirios” which I won the Jose A Baragano award with, a more important event. Of course, every story or novel is perfectible, and mine isn’t the only exception.

Why is it important to win this conference/debate? Well, it continues to put me in the spotlight in this circle and gives me the opportunity to compete in a more serious literary contest. All of this helps, along with the publication of my first book, on the road to getting my work published.

Well, let’s get back to the event. Reading my story, I received some criticism from the jury. The worse thing: One too many accents and an ending that could have been resolved with the plot. I don’t agree with the last point, and that was only one juror’s opinion. The good thing: I was told that I have the skill of storytelling and a writing style that hooks readers from the very beginning. Up until now, nobody had received better feedback.

A while later, a talented, young 19-year-old woman read her story. She had recently won a national literary contest. However, the most interesting and strange thing is that one of the writers who was on the jury was the director of the literary workshop that she attends. Her mentor, ultimately, so I don’t think it was right for him to be one of the jurors. Neither right nor fair. When I learned about this, I began to doubt my chances of winning. Logical right? We all finished reading our pieces and the jury withdrew so they could deliberate with their respective copies.

Minutes passed by. We waited for half an hour and they still hadn’t reached a decision. They finally came to give us their verdict.

The young lady won the prize and I was given first mention, as well as a “small package” and a boring diploma that will rest in some corner. Ahhh, and… I earned the right, along with the winner, to take part in the next conference/debate which will take place in November, a more prestigious contest by the way and it will take place on a beach.

So, at least this year I’ll be able to enjoy a free mini-vacation.