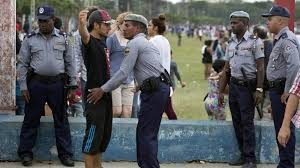 HAVANA TIMES – I’ve known him for years. He’s from my town and it still feels like I see him there, playing soccer with other kids in the neighborhood, in an improvised field on a bit of land next to the polytechnic university. That’s where he graduated as a medium-level technician without a future.

To tell you the truth, there’s no future for almost any graduate in Cuba, whether they’ve studied a medium-level course or further education, they’re still limited.

He was a slim young man back then, almost scrawny, and very tall.

He used to be pretty blank in his expressions. He liked to talk about what is called the most universal of sports: soccer. About Messi, Cristiano, Barca, the Champions League, as if he spent his whole life in it.

He was the typical millennial who only knows how to talk about soccer, reggaeton or videogames.

Well, he joined the Ministry of Interior a while back. He passed some courses, it seems he did some weightlifting by his new athletic build. Over time he became a lieutenant, head of a Unit in a nearby town.

I’ve seen him now and again and we always greet each other politely. Now, he has a more arrogant air to him, as if his new position has turned him into a man of status.

I ran into him one of these days. We were traveling in a car with other people, all from the same town. There, he boasted about the respect he got with his new job. Especially the vast number of fines he has imposed now during lockdown.

“When I’m bored, I get on my motorbike and go to X place and give 6 or 7 fines,” he says while smiling, as if he had done something heroic.

I was surprised by his nerve when he admitted that he had fined an old woman 2000 pesos. According to his account, it was noon. The old lady had explained that she had lowered her mask to drink a soft drink, because she is diabetic, was hungry and had been standing in line at the pharmacy.

I pretended like I wasn’t listening, but at that point I had bite my tongue so as not to spurt something out like, “Why are you such a shithead?” In the end, it seemed that his listeners laughed along.

We are being attacked by a highly infectious disease, which has caused the loss of human lives, as well as consequences for the rest of the infected. So governments have had to take measures in order to control the scourge, some of which tough and restrictive, but necessary.

However, extremism and relishing in other people’s pain isn’t fair. Unfortunately, I’ve seen a lot of this recently.

This young man is just one of many who are fulfilling their role of executioner down to the T, a role they’ve been given. It seems they have no way of thinking for themselves. They are the hounds described by George Orwell in his 1945 book “Animal Farm”. They are the ones who won’t hesitate and massacre their own when the time comes.

It’s also worth adding that Cuban police courses involve brainwashing and indoctrination, which are key to their training.

I wrote about good people in Cuba a few months back… well, let’s be clear, there’s also a lot of shitheads out there.

2 thoughts on “Cuba Has Good People but also Shitheads”

Lord Hummingbird – Song of the Day