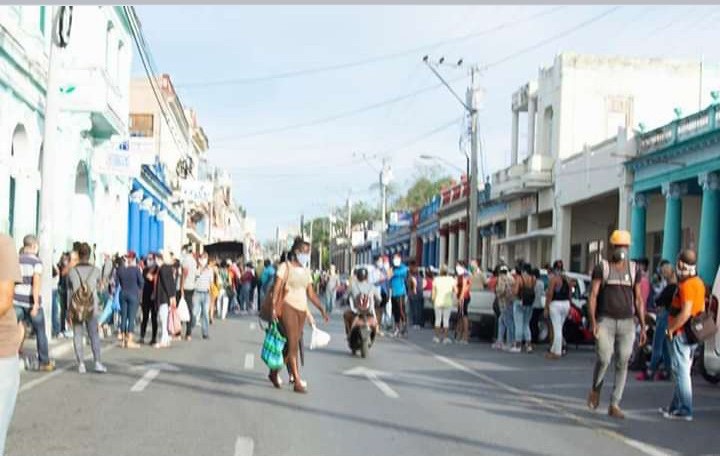 HAVANA TIMES – Pinar del Rio city is stirring amid a hive of people who chase after essential items. It’s like New Delhi, Calcutta, Bombay… any one of these Indian cities which we often see on our TV screens, where people crowd together forming a sea of heads that seems to be never-ending.

Nobody knows what’s going to be sold. It might be chicken, cooking oil, crackers, detergent, soap, toothpaste… nobody knows. Chances of becoming infected with the new Coronavirus isn’t people’s top concern, right now.

Some days ago, a TV news report on Tele Pinar (Pinar del Rio’s provincial channel) featured complaints about hoarders taking first spots in line, saving spots for their partners in crime, finding a way to buy more than once and then reselling these products at exorbitant prices.

The crowd was annoyed and frustrated in front of reporters. So, measures were taken to organize lines. Tickets are handed out from the crack of dawn, so as to organize these huge lines that have been forming.

There is a curfew in the city because of COVID-19, which is really silly considering the fact that people mostly crowd in the day. People aren’t allowed out on the street between 8 PM – 6 AM. Police monitor the streets, stopping and fining anyone who breaks this law.

If you want to go out and shop, you need to leave home at the time that’s been decreed, take your place in line and wait. However, a friend told me that it is really hard to buy things, even like this. She recently woke up at 5:30, got to the store at 6:00, but she didn’t manage to get a ticket. They were only handing out 300 and she didn’t get one.

What’s going on? It’s unbelievable, really. Lots of people are already out on the street, from the early morning. Dodging the police in a script that reminds me of my childhood when I used to watch that show called “La Comedia Silente”, a collage of comedy movies that were parodied by Armando Calderon, the man of a thousand voices, taking on the characters Charlot, Matasiete, Barillon, etc.

They are climbing up trees in the Roberto Amaran park, better known as “The Forest”, they hide in nearby homes agreeing beforehand and paying the owner, they camouflage themselves down some dark alleyway, or they just hide in the funeral home, amongst the mourners of somebody who has passed.

These are the disguise techniques that are being used to dodge the police’s watchful eye. When the police whistle as a sign that the curfew has lifted, these groups of people appear from out of nowhere (like the Viet Cong did on US troops in the Vietnam War), and are crowding outside store doors in less than a minute.

All of this is the result of chronic shortages that we’ve had dating back before the pandemic. Only it’s gotten a lot worse, now.

This is why reality beats fiction, in this country which has been in a vicious loop for a long time now.

In the meantime, ordinary Cubans will have to wake up every day, worrying about whether they will be able to get the things they need for their immediate future, surviving amind a struggle where the slogan is “Save yourself if you can”.

4 thoughts on “Cuba is Where Reality Beats Fiction”