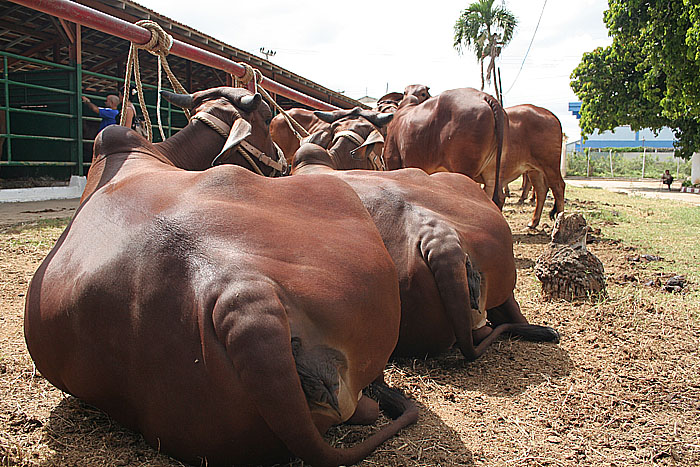 I first ran into Jose Ernesto due to those things that happen in life, as it placed him in the path of an interesting story.

Shy, but resolved, his words are those learned after getting up every morning to stand up over the earth and beside a cow.  He’s a clear-thinking and polite person with that good family upbringing that sometimes seems missing today.

His pleasant and forthright wife Graciela facilitated our communication while we waited to be seen at the Housing Office, where we had met a few days earlier.

This hardworking man who was so dedicated to his family had worked in dairies since his very first job.  He was very attached to nature, but especially to animals.  “We always had cats and dogs in the house, plus we raised pigs,” he said self-assuredly.

At those dairies it had been his job to wash, feed, vaccinate and milk the cows, as well as — in some cases or others — to help them give birth, though that would mean he and his family getting almost no sleep.  Their jitters came from not wanting to lose a calf or its mother, which would mean him having problems at the dairy where he worked: “With our plans to increase growth, and with our milking projections, losing a cow could lead to legal problems.”

He used to participate in the annual sugar cane harvest when it was on the rise. He was recognized as a “National Vanguard worker” and “Fidel personally offered him a trip to the USSR, which he refused,” according to Graciela, because as a part of the generation born at the beginning of the Cuban Revolution he thought that the trip wasn’t necessary and that he could go some other time.

“We had everything. We lived free of problems,” he said, adding, “I had a good income and the harvest had improved.

“The best custard crème filling or pudding is made with natural milk (without processing). And the best butter…”

“Now my health isn’t like it used to be,” he told me while looking at himself and feeling his body – thin and rundown.  “My arms were like this,” she said, making a circle with his thumbs and middle fingers.

Now he’s a self-employed worker – a sweets confectioner.  “I like sweets a lot,” he whispered, adding, “I’ve never earned such a comfortably wage.”