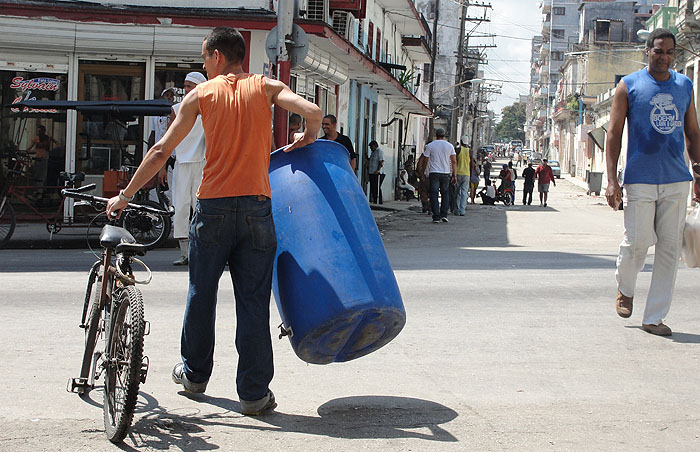 Folks! — wandering around or selling from out of their homes, running from the police or from the state inspectors — my compatriots have been risking their necks for a long time, because there’s been no lack of people discovering gaps missed by those who dictate the laws that have been abusive to others.

What I’m saying is that currently we’re undergoing a process of legal change making certain jobs offical, occupations that already existed but are now authorized.

Since the 1990s it has become more common to see people of working age wandering around filling up the streets — and surprisingly the stores — which has reactivated the myth that “people here don’t work.”  But after analyzing all of this, who can say whether they aren’t gainfully employed or simply enjoying the fruits of their labor.

For example, the generation born in the ‘90s learned that “nothing is free,” which was the opposite experience of those people — now burdened by the weight of the past — who were born before that period or during the Cuban Revolution.  Though that older generation didn’t develop abilities as a consequence of that social change, they do have a certain faith in some of the relations with the government.

In my opinion, the average Cuban is an individual who believes in progress, who starts new families and seeks out ways to obtain food and shelter (in Cuba or outside the island).

Asserting that Cubans don’t work is also one of the truisms that we buy into.  According to us, “Who wouldn’t like to live without having to work?”  Therefore, if they could they would (something applicable to most the human beings).

So, Cubans have continued working (hard!) and developing economic relationships that have allowed them to feed and dress themselves and to build or enlarge their homes.  All this is to say that Cubans have not been vagrants who have lived this whole time off of government handouts.

It true that the typical government employee (at institutions or state-owned businesses) isn’t very productive on their job or labors grudgingly.

But there has also coexisted the search for alternatives for survival, which is also valid. These alternatives have been viewed as “illegal” and banished to the world of nothingness. “You do nothing, so you’re to blame.”

The fact that people here don’t “work for the state” or are not employed within the state structure — for explicit reasons — hasn’t meant that people don’t seek money to live on.

Within the population employed in the alternative economy, probably only a small percentage of them are engaged in criminal acts like theft or robbery.

The largest number are likely to be found among those involved in what is called the “luchita” (hustling), an unpaved road that leads from state workers (trafficking on the black market), to private hands, and finally to consumers.

By the end of this story, people receive the same money that the government has invested.

Of course it arrived on a much longer and more expensive path, which in the final accounting (including everyone involved) returns to the national coffers, reimbursing itself as the endless cycle that has always existed, and that they themselves must have at some time analyzed.