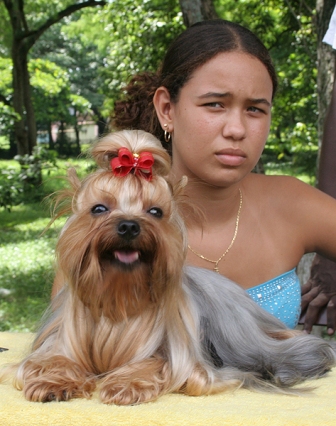 HAVANA TIMES, Dec 17 – Humans exist in this world without actually being able to compete with the rest of nature. If not for the coats, umbrellas, metal tools and such, we’d hardly make it from one season to the next.

At the same time, animals are well armed with teeth and claws for digging and tearing, thick skin or scales for maintaining proper body temperatures, tails and agile hands for maintaining their balance and climbing, as well as stingers and horns for defending themselves.

Dogs have been very helpful to us. They’ve learned to serve as herders, hunters, load carriers, companions, guides for the blind and attendants for the police.

Here in Cuba we have Chihuahuas, Pekingese, Dachshunds, Cocker Spaniels, Boxers, German Shepherds, Rottweilers and others. Of course, dogs called “satos” (mutts) make up the majority of those that live with humans or roam the streets.

The Chow Chows that were first brought into the country in the 90’s were amazing to me, with their black tongues and all that hair. I had already gotten used to seeing Poodles and Bichons suffering in the heat, which is why many owners have them sheared.

Some people have also brought in Afghans, Dalmatians, Siberian Huskies, Collies and Labradors, and I only recently discovered the existence of Shar-Peis (I’m not a real dog lover since my preference leans towards cats). The Shar-Pei I saw looked impassive, which perhaps is what characterizes them.

It’s not right to change animals just to admire their beauty, especially since they’re adapted to certain circumstances (taking in consideration their physiological functioning with regard to factors such as the weather). Sometimes the sensibilities and feelings of the owners of these and other rare animals in the tropics are full of selfishness.

Genetic modifications (mainly cross-breeding) and physical alterations (mutilation by cropping back their tails and/or ears) don’t take into account the negative consequences to the health of these animals.

It’s unfortunate that we’ve come to feel entitled to transform nature against itself and us.

But people! I know this has been the subject of debate around the world, but in Cuba it’s a concern of only a few. The average person doesn’t have a chance to un-focus their mind to consider such things. They have to concentrate on eating, surviving, the weather, health issues and their own immediate problems.