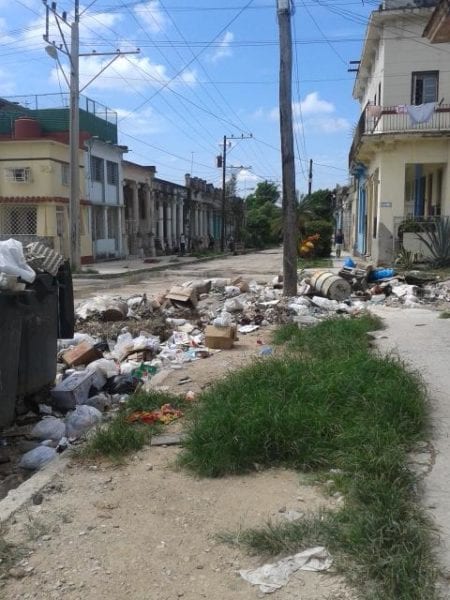 HAVANA TIMES — It’s been raining a lot recently and in addition to the benefits that rain brings us, it also brings unrelated-to-nature collateral damage to the City of Havana.

This is evident in dispersed garbage accumulated in garbage heaps that multiply across the city, as well as the liquid rotting of organic materials in domestic garbage.

And these trash heaps usually accompany garbage containers (plastic tanks) on many neighborhood corners, which exceeding this physical space, spill out onto the street to take on greater dimensions (1 to 5 meters or more). This garbage isn’t collected by those who should be collecting it (Communal Hygiene and Services Company), plus a negative neighborly attitude of people who find it easier to throw waste outside, even if the Tank still has space.

This isn’t something new in the capital and these are some of the reasons: 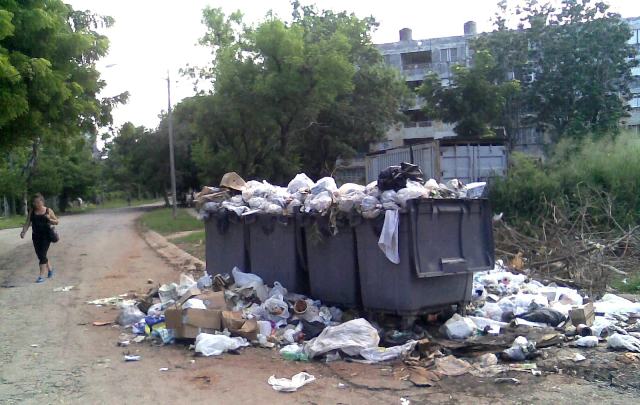 Neighborhoods such as Cerro, Vibora, Santos Suarez, Poey, Alamar, Cojimar, and others including San Miguel del Padron, La Guinera, etc., are examples of our garbage boom, often sources of contamination to human beings.

Other ways the garbage affects the community include:

– Shoes as good carriers along with the feet of our pets, mostly dogs, who rummage through the garbage.

– Because children play baseball and other games on the street, a tradition of the poor.

That is to say, we are all involved, as flies, cockroaches, other insects and rodents associated with garbage heaps, are always ready to invade homes, cafes and meat shops.

These dumps also serve as a place to discard rubble thrown out when houses are being remodeled – which don’t have an allocated space for being disposed of properly – as well as garden waste from pruning gardens and green patios.

Cuba buys garbage containers and trucks from foreign manufacturers. Right now in Vedado, Old Havana and Central Havana, new blue tanks have popped up which have been made out of a plastic which appears to be a little more flexible.

Many residents complain at neighborhood meetings, where an inhabitant can supposedly go to complain and receive answers, but this doesn’t change anything, although soldified public opinion: “nobody can change this”, means that opinions don’t reach the public sphere, and so the garbage collection schedule is delayed.

I ask myself: How much is the organizational structure which deals with Communal Services totally responsible for this situation which could contribute to greater Public Health costs, as both Dengue and Zika – because water also accumulates in the garbage-, can unleash an epidemic of another kind, which benefits from our extended summer’s continued heat? 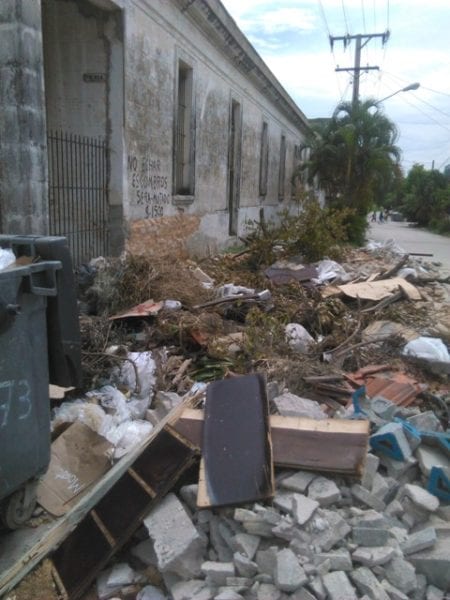 On the one hand, Communal Services usually suggests – at Accountability Assemblies- that there isn’t enough petro and that they don’t have the parts they need to repair the garbage trucks.

And this is where I’d like to share the story an employee who works for Communal Services shared while waiting at a health clinic:

– That the fuel that’s left over at the end of the working day is taken by the truck’s driver, to sell it off;

– That they still abide by a “white book” drawn up in the 1970s and ‘80s, which instructs that they should collect waste within a 1 meter perimeter around the Tank, but when they get somewhere and there is more than a meter’s worth of waste surrounding the container then they think, what’s the point of doing it? and so they decide to go on and leave it as it is;

– That garbage workers falsely report on loads of waste deposited, which increases their salary, and this has become normal behavior.

– That mentally disabled people used to work in this profession and now these positions have been filled by people with a greater intellectual capacity to that which the job demands- I guess it means that “astute” * people also work there now.

From what I understand, these workers are immune from punishment and so can constantly violate the ethics of their job without evident conquences for them but there are definitely evident consequences for the population.

On the other hand, cities in provinces are a sight to behold, as you don’t find garbage spread out everywhere, although neighborhoods such as Vedado and Miramar in the capital, don’t suffer from garbage heaps, like other more heavily populated neighborhoods do, where the majority concentrate in lower social status neighborhoods and where many of the city’s migrants live, increasing the amount of waste created.

Cuba can have a shortage of oil, but that doesn’t justify the garbage piles that exist and the scale to which they exist, as local solutions can be found with other already experimented variations, such as horse-drawn cart collections, as well as reeducating and sensibilizing the population in this subject. People don’t feel any legal restrictions, or moral ones it seems judging by this behavior, and sometimes, they give the responsibility of getting rid of this waste to their small children.

Ladies and gentlemen, if Cuba invests in tourism and in other industries, why doesn’t it want more for its people and to look out more for their health?

At the end of the day, the kind of tourism that Cuba aspires to have, won’t visit a country where they can get sick or be in contact with an infested people. Today, Cuba is the place to be, but everything will not be OK.

*Astute: People who are always alert and take advantage out of everything they can. “The astute live off the dumb.”

One thought on “Overflowing Garbage in Havana, Whose Fault?”