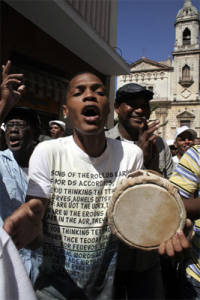 HAVANA TIMES, Dic 2 — More often than even he himself would have liked, he would repeat a phrase that always prompted the curiosity of anyone who heard it. He would say, “My neighbor, the master of the ritual,” which sounded as cryptic and mysterious to many Cubans as the secret Abakua sect to which he associated.

This is a belief system that came to my country from Africa with slavery, establishing itself in Matanzas and Havana. It became evidenced more in the capital, particularly among dock workers (the vast majority blacks) and in the slums of the city long before the 1959 Revolution.

Among the courageous peoples brought from Africa (Mandingos, Araras, Ganges, Carabalies and Congos), there came to Cuba those who initiated the “Abakua” or the “Nanigo” sect. It was exclusively for men and had a hierarchical organization of chiefs or levels that headed the group of members invested with the “great power” or the “force in Ekwe” or the foundations carefully guarded by those who give honor, prosperity and salvation to their possessors.

As is always said, a member of this society has to respect the principle of being a good father, a good son, a good husband and a good brother – like in other fraternities. The vast majority of the members believe in the Yoruba religion, though they conduct liturgies particular to Abakua.

In my friend’s small neighborhood, they have a ceremony — which mustn’t be missed — with an unmentionable Abakua “game” that enriches the neighborhood youth, predominantly black.

My friend always admired them, at least until years of living among them began to reveal to him that the organization had undergone “certain changes.”

With its growth since the 90’s, he explained, they no longer have the same requirements. In addition, negative role-models have been become involved in the games. Members have very different behaviors from what is written down as their principles.

Also, just like everything taking place within any human society these days, they have become a reflection of our own: violent, “tough-guy” oriented and sexist – in addition to everything negative that comes with poverty.

They are often accused of being criminals, since for their initiation they have to kill (in the 70’s it was said that this pledge required human blood) and because women don’t occupy a significant place due to a legend that accompanies them and which began the belief.

This legend tells how Sikan, the daughter of a chief (in ancient Africa), while fetching water from the river also drew in a fish – one that contained the soul of Tanze (a deceased king), who had great power for prediction, as could be expected. To make a long story short, she was viewed as a traitor and sacrificed to the sound of a drum: the Ekwe, which produces a sound known as the soul or the voice of Tanze.

According to my friend, the respect he felt for this group vanished. It’s gone, folks! Like in my pretty little Cuba, where everything is continuing to be transformed.