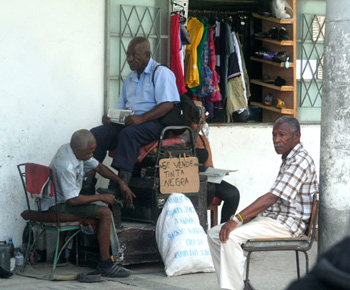 HAVANA TIMES — “High prices. Shortages. We have to adapt to the times, “I’m alive only because God wants me to be,” “The problem is loneliness, the problem is food. One has to shoulder a whole lot of problems,” “A 242-peso pension isn’t enough to live on” – such are the comments the first interviewees make in Didier Santos’ and Yaima Pardo’s documentary Al Final del Camino (“At the End of the Road”).

The film gathers the testimonies and thoughts of Cuban pensioners who look back on their last decades of life on the island.

“I’ve given more to the State than the State is giving me at the moment. I’ve worked all of my life. I’m now 83,” another interviewee says. The documentary draws our attention to a social reality we co-exist with but do not know in depth.

Al final del camino also gathers opinions and concerns on the subject from representatives of the institutions who offer services and work with the elderly in Cuba. These officials call for long-term and permanent care for those who require it, “a quality of life as similar to the one [the elderly] once had.” “The elderly are an increasingly broad sector of Cuba’s total population,” we are told.

Before, retiring was synonymous with spending time with one’s grandchildren (while they were still children), enjoying a good baseball game on TV, playing domino with friends at a street corner (an ongoing tradition), going out for a stroll along Havana’s ocean drive, visiting old friends or relatives one didn’t have time to see while working, going to premieres at movie theaters, going camping with the family, and throwing parties (something everyone enjoys).

Many elderly people in Cuba still refuse to join old people circles that exercise outdoors or practice Thai Chi (which is very much in vogue in Cuba today). Some time ago, the elderly themselves baptized such programs as “The Junker Plan.”

Some remain active in their neighborhoods, but others suffer lonely existences, depression and anemia.

Those who live with them are sometimes unable to care for them adequately or even show them a bit of affection.

Many who lost their loved ones – people they lived with or were very close to – now live with their children and grandchildren, people who are immersed in their own daily problems and do not pay attention to them, do not understand them or are disrespectful towards them. Some have children who live very far away or who have left the country.

Others aren’t ill but feel abandoned. They are visited by relatives or acquaintances who treat them in abusive ways or simply do not look after them (and, in many cases, only wish to inherit the house or apartment the elderly person lives in).

Those who live alone have no means or the physical capacity to maintain or repair their homes or to keep their surroundings clean.

In Old Havana, there are subsidized homes for elderly people who have no means to live on their own, but…what of the rest?

The elderly have a tough time preparing food for themselves, let alone maintaining a healthy diet rich in vegetables. “It’s too expensive!” one of them says. The government’s welfare program offers a series of cafeterias that serve lunch and supper at very low prices, but there are those who regard these places as unhygienic.

A great many elderly people in Cuba spend more money on medication than on food, for afflictions typical of their age: high blood pressure, arthritis, diabetes (the top three on the list). One hears old people say “getting old is the worst thing out there,” referring to all of the conditions that begin to afflict you.

The majority of elderly people have no other option other than getting by on a pension which is well beneath the minimum needed to make ends meet.

There are those who don’t even have enough to pay off the debts they accrued when the “Energy Revolution” campaign was implemented and electrical appliances were sold on credit to the population. Others retired on a 70-peso pension and currently receive 200 pesos thanks to the revision of Cuba’s Social Security Law – but even the new pension isn’t enough.

The government argues that it pushed back the country’s official retirement age to reduce the financial impact that paying pensions for long periods of time has on the State. Though it appears the life expectancy is increasing on the island because better healthcare services are being offered the elderly, their vulnerable and unstable social situation is actually making their lives worse at present.

Al final del camino warns us that Cuba may become one of the most aged countries on the planet if this matter isn’t addressed in a timely fashion.

One of the interviewees suggests that society must look on the medical care, proper nutrition, housing, privacy and transportation of the elderly as a first-order priority, and that old people must be given opportunities to interact with other generations.

“We must take on the social commitment of creating a new society with new social relations.”

“The population must be more proactive, it must create, not merely comply with instructions received from above. We must participate more actively in the creation of the policies that affect them. They cannot be the objects of these policies, they must be their agents.”

It is very refreshing to see a film that gathers undreamed-of images of dilapidated, dirty and neglected spaces where old people live, a film that reminds us the elderly “are an important part of society and must be treated with dignity. (…) They do not deserve to be left to their own resources. They deserve a decorous life.”