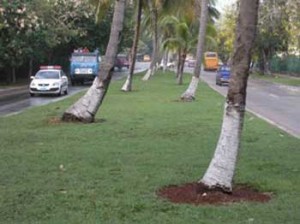 HAVANA TIMES — The entryway to the Havana suburb where I live has been differentiated from the look that characterizes a community distant from the urbanity of the city’s downtown.

Along the over one mile stretch of access road to the Alamar community, they have painted the curbs white, along with the lower parts of the telephone poles, trees and even saplings. Damn! – the only thing they didn’t paint was the grass.

From one level it’s agreeably satisfactory, and when looking from the perspective of the horizon it might not be noticeable to passengers on buses packed to the brim, ones filled with those who are dazed, exhausted or alienated when they return home without motivation or consciousness of this “green” space.

Nor did I myself realize that these changes actually extend for miles inland along the road used by the P-11 bus. It didn’t register until I was walking along there on foot one day.

In this way and almost indirectly — with the intention of sprucing things up — we are pursued by uniformity.

This manner of impacting the environment reminds me of the assumption, apparently psychological, held in Cuba concerning the need to standardize the natural environment around entrances; more specifically, those leading to military units and certain government institutions. 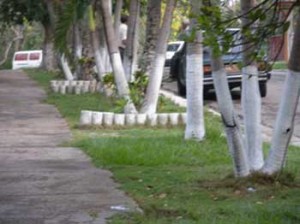 This — imitating as the best reflection (perhaps unconsciously or for convenience) of massiveness, pluralism, uniformity and similarity — shows disdain or looks down on that which is unique or individual.

All of this is done without taking into account or minding the damage that these acts have on nature, which doesn’t display its protests in obvious manners, but over longer cycles, ones that some earthlings interpret according to their interests as they seek the causes in other things.

Lamentably, and as a result of such disrespect for the environment, the number of sick trees will continue to increase as well as their disappearance, while the little nearby animals will distance themselves.

Some people declare: “Long live uniformity! Down with the natural!” Apparently it matters less to live in a place with more trees — which is exactly what this space need — in addition to the lack of respect for what little remains.

Fortunately, on occasion nature strikes a balance early on. The recent rains have removed most of the whitewash, leaving only the film of what was.

One thought on “The Whitewashed Entry to My Suburb”