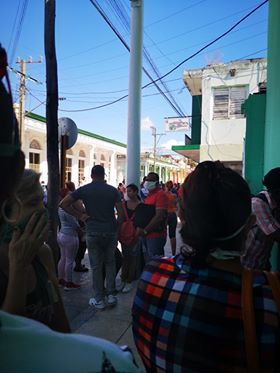 HAVANA TIMES – Ladies and Gentlemen, the Covid 19 is not a game, why don’t you understand it once and for all, I mutter to myself as I separate as much as I can from the lady in front of me. The person behind me, apparently, is in tune, because she does the same, managing to keep a distance of one meter, in the midst of the tumult, both from me and from everyone around her.

The virus has killed more than 39,000 humans worldwide, the number of positive cases has reached 814,000.  Meanwhile, the rate of contagion continues to rise in Cuba, the next one to suffer from it could be any of the more than 100 persons desperately waiting in this line to buy two packages of chicken, or at least one.

In my city of Guantanamo, until now, there is only one positive case of coronavirus, but who can say that right now, among us, there aren’t more people who are incubating it without any symptoms. Whether they arrived from abroad 10 days or more ago or a relative of someone who did; with the number of people traveling every now and then to buy clothes for resale and returning after three days, who can feel safe.

My heart tells me one thing, but the fight for survival is greater and I can hardly stand firm in the line.

I try to forget all the worry that clouds my thoughts, and I start a pleasant conversation with a lady I know from near my work. She wears a mask and so do I, but we still maintain our distance.

Suddenly someone is trying to sneak into the line and all hell breaks loose: they push me towards the door of the small store and when I come to open my eyes there are almost a dozen people against me. The police insist on maintaining order, but people pay little attention.

It is almost noon and the heat excessive, not only the spirits are exacerbated, also the smells. What worries me the least now are the strong smells, but the thick beads of sweat that run down various faces.

OMG what am I doing here? I wonder in horror. I must disappear from all that. 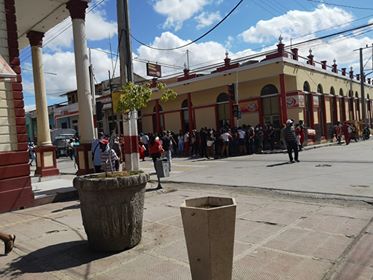 The death caravan in Italy comes to mind. Not saying goodbye to the dead has to be worse than death itself. But if I am sincere, I must say that I’m not so worried the virus finds refuge in my body, with the hard head that I am, I think it will take more than a virus to kill me -or it may be that I do not care much…

But no, I don’t live alone, and of course my family does matter to me. I have two daughters; There are also my parents, one is diabetic and the other is hypertensive and stubborn, in addition.

Right when I was telling myself, I’m going to the get the hell out of here the person behind me said: “Come on now, go in”.

I didn’t know what to do. I thought, could I leave at this point without chicken?

No, I went in, grabbed the two packages allowed me, I paid, and flew home.

When I arrived, I was greeted by a sign that my oldest daughter put up, which says: “when all this is over we will hug again”.

I immediately jumped into the shower with clothes and everything. I lathered myself over and over again, trying to remove all external dirt; the inside, well, that is more difficult to remove.

2 thoughts on “Between Lines and Pain in Guantanamo”