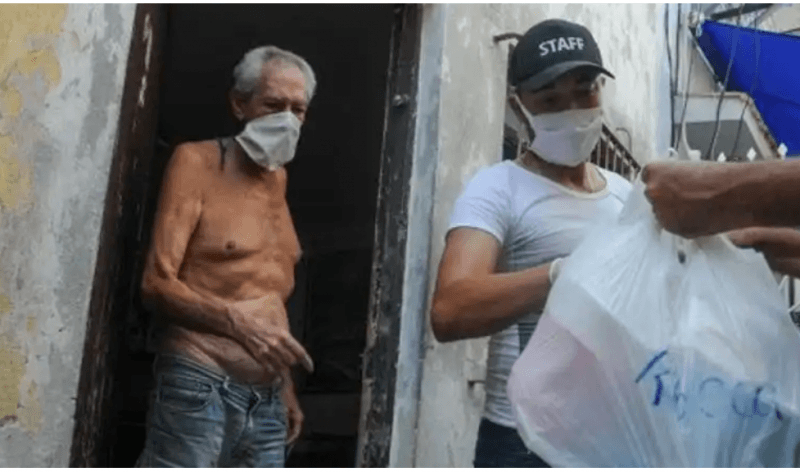 HAVANA TIMES – A few days ago, I went to the market in search of vegetables to prepare a salad. During my long wait in line, a 40-something-year-old man on a bicitaxi caught my attention. He had some bags with him, full of plastic containers.

This man stopped near me, in front of a house and knocked on the door. In just a few minutes, a 70-something-year-old man opened the door, using a walking stick to hold himself upright. The younger man smiled and handed him three pots of food. The older man thanked him, and the other man bid him farewell until the next day, but not before telling him what tomorrow’s menu would be, and assuring him he would come by a little before midday.

I really was overcome with emotion, being able to enjoy that scene: however, the woman in front of me, who had also seen what happened, became tearful and let a few words escape her lips: “If only my parents were lucky enough to have someone help them like that.”

According to what the woman told me, with tears still in her eyes, her parents live in another province, and they are both very old and sick. Her mother suffers from heart disease and her father is a diabetic. Ever since the beginning of this pandemic, the government had promised to provide aid to the elderly. In fact, somebody from Social Security went to see them, taking a bag full of vegetables, and promised to come back after a few days. However, days passed by and nobody ever went to see them again.

My companion in line explained how she was unable to travel to the province because of the pandemic, but that she sends money by transfer and a neighbor does them the favor of picking it up and also, does some shopping whenever she can, although if you bear in mind the fact that the number of items per person is limited, she can’t do all that much for them either.

Didn’t the social workers ever show up again? I asked my companion. To which she responded that they did go to tell them that the government has announced aid only for the elderly who live alone. So, what happens now with this old couple and so many others that can’t or shouldn’t be going outside to avoid becoming infected?

I was born in the 80's. I love nature and animals, as well as my country. I admire the sacrifice of a people. I consider myself a simple and honest person, therefore I detest injustices. I have a taste for the arts in general, but especially for literature, photography, and cinema. I believe in the power of the word and in the ability of the human being to change the world.