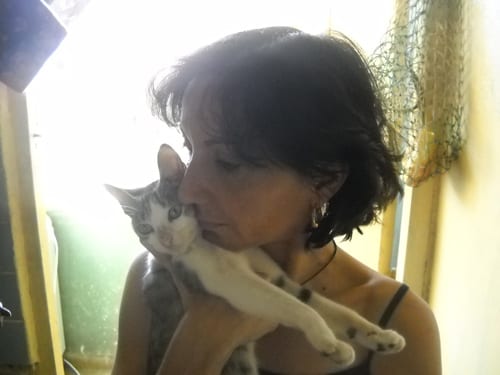 HAVANA TIMES — One of the expressions of this crisis of values that is eating away at Cuba and which many people are taking seriously, is the number of stray animals on the street and the condition they are found in.

In neighborhoods on the outskirts, chickens and hens don’t escape this fate and try to survive on the streets on the loose, rummaging through bits of grass and fleeing from kids’ abuse.

However, a small percentage of humanity in Cuba have shown how several spontaneous projects have managed to be put together (not by government initiative), and they work hard to heal our city without the much-needed support an Animal Protection Act offers, which has been asked for to death and is still a phantom.

There are some people who do this independently, they convert their homes into shelters where they take in starving, sick animals, which have been run over by some kind of vehicle or are victims of abuse. Without donations or exemptions, they care for these creatures as best they can and share their own food with them, even paying vets just like any other customer.

They are “crazy” in the eyes of ordinary people because they make their lives more complicated just for the sake of it. According to medicine, they are victims of a psychological disorder: Noah’s syndrome.

Animal rights organizations know that these people are the foundation of these projects and they have given them a dignified name: protectors.

We always had pets in my home. Over time and with the social decline in society, we ended up taking in more than what was reasonable, thereby making our lives very uneasy.

It’s a known fact that during the Special Period there were people who used to hunt for cats to eat. Oh, how many I took in to save them from these predators…! How many useless arguments with sadistic individuals! A neighbor used to train his fighting dog by throwing poor dogs off of the street to him. I used to argue with another neighbor’s husband when he used to push a pregnant dog down the stairs.

Yep, they labeled us “the crazy ones”, tormented, and the majority couldn’t have cared less. In order to avoid having a serious problem with this neighbor, my mother ended up taking in this abandoned dog too.

When I found out we were “protectors”, a wave of relief and difference washed over me. Because it’s true that, in choosing to take on a problem created by others, our intention to protect these victims is the leitmotiv.

But, at what cost?

If domestic animal possession was controlled by the law, if abandonment of these animals were a penalized crime; if the institution destined to protecting fauna upheld its responsibility and the government were to allocate political willpower and resources to changing this shameful aspect of Cuba, the majority of anonymous protectors would surely have a pet at home because they wanted to, but they would appreciate the freedom to be able to focus on their own personal projects, which is more than a fair right.

One person, or many (which isn’t even the case here), CAN’T replace the role of the Government.

Personal solutions to issues which used to be resolved by the government, is a growing trend. Due to the lack of public street lighting, people put powerful light bulbs on building ledges; in the face of a slow repairs plan, whoever has the means fixes up and paints their apartment not worrying about whether the color is out of place with the rest of the building or not. Communal grassy areas are shared out and neighbors pay for pruning services individually. The important thing here is to save “their piece”.

But, there are problems which not even taking on a huge burden (physical, financial and emotional, including community contempt), can be fixed on an individual basis. Or by small groups.

Domestic animal protectors (without any other desire really other than to protect), are reacting to a situation of eventualities, of the country’s alarming dysfunction that has gone on too long.

We are the result of a social illness which has a cure. All we need is for those who have absolute power and access to resources to dedicate those to dealing with the problem once and for all.

2 thoughts on “The Limits of Our Protection”