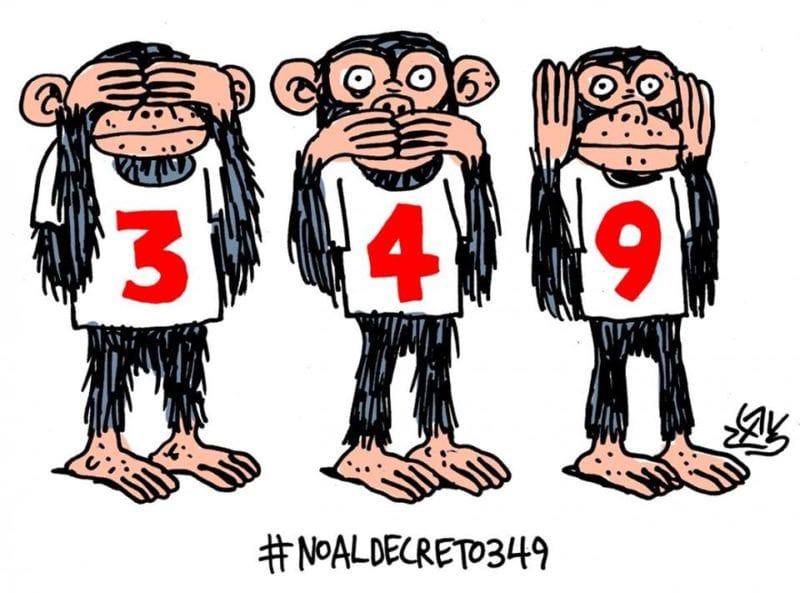 HAVANA TIMES – On August 9th, I stared at a summons from the Ministry of Interior (on my fridge with other important notices that are kept up with magnets) for my husband Yasser Castellanos, a visual and Hip-Hop artist as well as a Havana Times’ illustrator.

Ever since we had joined the “Cuban Artists against Decree-Law 349” campaign, we guessed that this could imply “crossing the line”. A line which seems to surround us, even though we can’t see where it stands exactly.

When you just start to believe that things that affect us here in Cuba could change, that we play a part in this change, the line appears to remind us that the only thing they want from us is our indifference.

On August 10th, I accompanied my husband to the “interview”. The police officer in charge of this case was kind enough to let me take part. The focus of the debate (if this is what you can call a conversation in parallel lines), was a video that had been uploaded online in which several rappers expressed their disagreement with Decree-Law 349. But, even more than the video, they wanted to talk about the concert that had been scheduled for the following day at the Museum of Dissidence’s headquarters, where these of Cuban rap singers would perform. The objective of this meeting was to make it perfectly clear that they wouldn’t allow the concert to take place.

On Saturday August 11th, the artists that still hadn’t been arrested like Yanelys Nunez and Luis Manuel Otero Alcantara had been (musician Gorki Avila had already been surrounded at his home), met on Damas street, on the corner of San Isidro, where a deployment of police officers, State Security agents and Rapid Response brigades were waiting for us.

After a long and exhausting dialogue (between the lines) with cultural decision-makers, the protest broke out, repressors kicked into action and the situation became horrific.

I left before things exploded, but I have gathered some emotional responses to the event; from the exaltation with which Amaury Pacheco, poet and coordinator of the Poesia Sin Fin Festival, Iris Ruiz, actress and activist, Michel Matos, founder of the great Rotilla and Punos Arriba Festivals told me what happened… as well as from the videos recorded by neighbors in the San Isidro neighborhood, the real protagonists of this story. 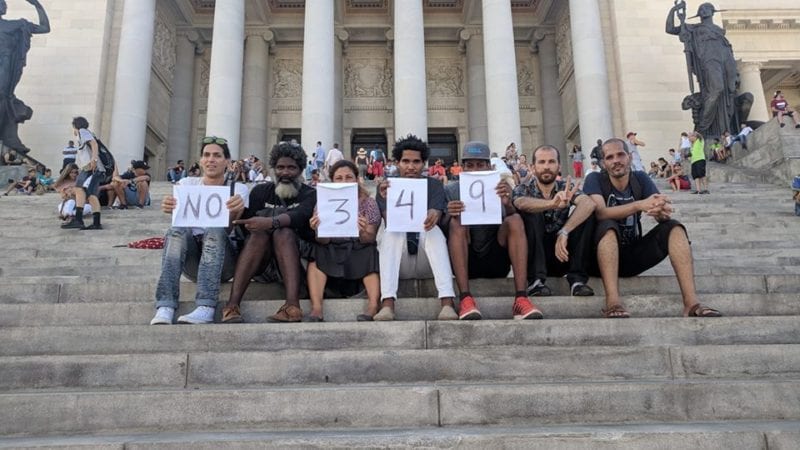 These were Cubans who didn’t chant “Viva Fidel!” in chorus, which the Rapid Response Brigade began shouting, who realized that these harmless artists were being violently handled, shouted out: “Let him go, let him go, let him go!” to the repressors who tried to put Amaury inside a patrol car (three men against one). Some Cubans hit the police car, outraged by such injustice.

The artists present didn’t have to speak to them, didn’t have to convince them or offer them immunity, rewards in exchange for their support. Crossing the suggested line is inevitable. The truth is simple, visible, irrefutable, even though these Cubans are now being told that they weren’t artists but terrorists and mercenaries.

Although each and every one of them has been stigmatized with the label CR (counter-revolutionary), like lepers suffered in Medieval times.

As of December this year, they will decide what happens inside our homes.

We, the Cuban people (artists or not), have the ability to discern what is right, like we saw on August 11th in the San Isidro neighborhood. We can decide to defend what is just. No decree-law has the power to take that away from us.

Concierto del NO a la Ley 349 en Cuba. Neighborhood concert to say NO to Law 349 that criminalizes independent art and artists in Cuba.

No to Criminalizing Independent Artists in Cuba

No a la Ley 349. No to the law that criminalizes independent artists.

2 thoughts on “What Do We Cubans Really Have?”