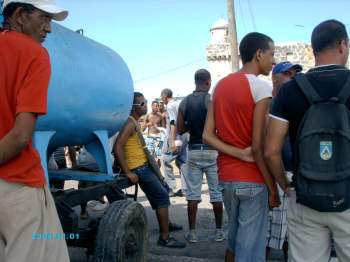 Here in the town of Cojimar (a neighborhood located to the east of Havana Bay), for more than thirty years people have celebrated the annual Ernest Hemingway Needle Fishing Tournament as a deserved homage to the famous US writer who enjoyed his favorite type of fishing in this area of Cuba.

This important event is always held in May of every year at different levels that include the municipal, provincial, national and international competition.

During the first decade of this event’s existence, everything occurred with emphasis placed on its principal objective: the needle fishing competition (for several species, including marlins, sailfish and spearfish). This activity was warmly welcomed by the public, and from the very youngest to the most elderly it was always anticipated approvingly. Unfortunately it has gradually degenerated into what it has become today.

This past weekend I decided to go to this event to once again verify what was already obvious. In fact, starting early in the day dispensers and tanks of beer are installed, while other points of sale offer rum by the liter and in bottles. Reggaeton music blasts from multiple and immense audio speakers that deafens any person who tries to get close to them, a situation that doesn’t allow the least moderate conversation between people, meaning that to be heard it’s necessary that you scream.

By noon there are already people staggering in the streets drunk, and before evening everyone there has in fact been exposed to various acts of crime, violence and armed threat.

In fact, this activity which began for the full enjoyment of people has become a menace as great as any earthquake, hurricane or even war — and I’m completely sure that I’m not exaggerating in my assessment — because it’s in agreement with the thinking of the majority of those of us who live here in Cojimar. 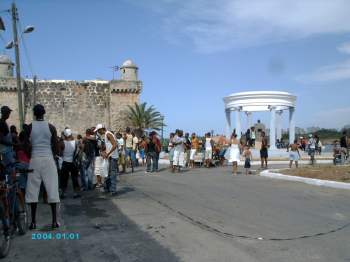 These days the police patrol the streets like never before, while many people like me wanted this beautiful month of May to pass by without this current completely degraded version of the Ernest Hemingway Needle fishing Tournament.

We are bombarded by media campaigns against addiction; laws are announced from above and poorly managed decibels of music in public or private in the early morning hours; attempts are made to give guidance and education to the leaders of these events so they’ll offer the public more balanced music that is attached to our roots and our identity. But what can we do?

We do what we want and we accept whatever is done by the organizers and those responsible for these events. By all this I’m not saying that they shouldn’t play reggaeton, but for this to be the sole and defining alternative leaves much to be desired. In addition, I wonder: Is it that in the last few years in Cuba we haven’t been able to have social events without exaggerated sales of alcoholic drinks?

Does this behavior respond to a call for people to forget their problems with this degenerate alternative? What is the cause of this social phenomenon?