HAVANA TIMES – I don’t know who put my name on a list to receive event notifications via cell phone, but for a while now I’ve been receiving news this way of different events being held in the city.

Over the last few days I received at least three messages about a Conga line to be held on Saturday, May 9 in conjunction with the VIII Cuban Day of Action against Homo- and Trans-Phobia. The musical parade was planned to extend from the intersection at 23rd and Infanta St. to the area around the Cuba Pavilion, a few blocks away. Without thinking twice about it, I got up early and went off to see the show.

When I arrived around 9:45 am, there were only a few people there; mass transit continued its normal circulation on the downtown Vedado avenue.

No music yet, but a lot of reporters; someone dressed up as a priest was stealing the show. Most of the people were taking pictures of everything around them, as was I.

Three or four young people with masks and hats were centers of attention, as were the transvestites. However, there were no performers involved in the event, and they were much missed.

I was left with the desire to see some creative images along with the Conga dancing. I believe that there should have been be something more than drums, rhythm, noisemakers and a lot of shimmying.

It began a bit late and more people did join in as the. A large gay banner, with its different colored stripes, spoke of inclusion but, in fact, the public that attended wasn’t that heterogeneous; most of the people belonged to the LGBTI world or were activists. 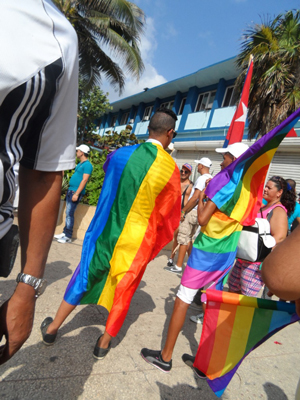 Once inside the Cuba Pavilion, the revelers gathered around a platform where speakers were talking about the discriminatory experiences they had suffered in their workplaces; they didn’t, however, get much attention from the crowd.

Afterwards there was a lot of music. Drinks, food, and souvenirs such as posters, fans, and cloth bags – sold at the usual inflated prices – livened up the hot Saturday.

As far as I could see, the afternoon went by without much tension.

Although a hundred or so people attended and apparently enjoyed themselves, I feel that the Conga program lacked greater ambitions. There was a dearth of something, a kind of a vacuum. This wasn’t only my perception, but also the perspective of other people I talked with.

Given that it wasn’t a theoretical event or an open tribunal, something more than the colored banners and common spaces should have been devised to enhance the musical initiative supporting this struggle; something that could attract more people outside the universe of LGBTI people. People like myself, who aren’t up on the activities that CENESEX and other alternative groups realize, and who need to know more.

If we stick with the dance, the mere fact of a public appearance, a purely representational act, it all goes by unnoticed. If we don’t find a way to get together and raise awareness, including through music, when the trumpet of the Conga dance goes quiet, everything just goes back to the same old place.

One thought on “Conga Line against Homophobia in Havana”