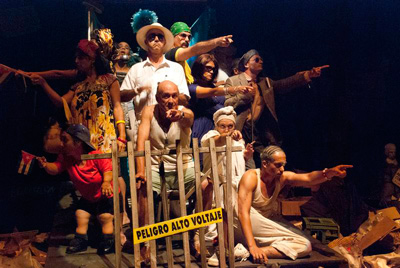 The show I attended on a Sunday was staged before a full house, though some could not sit through the entire three-hour play (which had no intermission).

Indeed, if there is anything this production can be criticized for, it is the fact it proves long, far too long.

Even though the director, at one point during the show (specifically after an altercation between an usher and a lady in the audience who refused to turn off a cell phone that would not stop ringing), apologized for the duration of the play and called the piece a “work in progress”, it is a shortcoming that undermines the impact of the performance as a whole.

Cloaca stages the reunion of four men who were close friends when young.

In the twenty years they were apart, the characters grew distant from one another. The gathering questions conceptions, precepts, fears and longings that reveal the concealed identities of people.

Relying on a minimalist but balanced set decor, the work, divided into “chapters”, makes use of audiovisual materials and improvisation to imbue the experience with a fresh and spontaneous dynamic.

What drew my attention the most is the notable inclusion of self-referential elements (and I sincerely don’t know whether the original play does something similar).

The fact one of the characters visually embodies the director of the play and that some of the latter’s works (such as the film Contigo pan y cebolla or La Hijastra), turns the work into a declaration of principles with a fair degree of personal catharsis.

It is also important to stress that, in a way, the stage play seeks to submerge the audience in Cuba’s artistic context and tries to reveal its clumsiness, corruption and other of its characteristics.

Cloaca was staged at El Sotano throughout December. The play will be staged at the Adolfo Llaurado and Raquel Revuelta theaters in January and February, respectively. The shortcomings of these first shows (such as repeated dialogues, “curse words” and screaming among the characters, which lose the desired effect as the work unfolds) will likely be reviewed by the El Ingenio theater group so as to improve the performance.