You hug me and I’m real. I can’t be anyone else.
You distinguish me, and I’m what comes together
Like a sound
– Angel Escobar

HAVANA TIMES — If Angel Escobar hadn’t committed suicide in 1997, he would have been one of the founders of OMNI-ZONA FRANCA. And it would seem like magic that such a visceral, necessary project, like OMNI was, would be born with absolute poetry at its heart, the same year we lost this black man, who spat on systems and lithographs. And history became really wonderful again when we discovered that that group of performers, schizos, writers, musicians, graffiti artists, cultural promoters, publishing house interns, coming from street empiricism, from wood-cutting workshops… are living and working in Alamar, a place where you are at total ease, where Escobar himself lived for quite a while.

The existence of this group for almost two decades now – which has been diluted down by natural phenomena such as emotional exhaustion, emigration, changes in personal philosophies – confirms Nestor Diaz de Villegas’ theory, who states that every Cuban suffers the same childhood trauma: a poet invades his cot, breaking his/her innocence. Martiesque pederasty is the substratum of our nationality and the origin of “the Homeland”. Following the wrong path of this poet and others; and begun in the madness of those claimed by the written word by another great poet, Juan Carlos Flores, (who also committed suicide), OMNI- ZONA FRANCA managed to become the stuff of legends.

And the good thing about being a part of this narrative and aesthetic experience is that collective memory doesn’t need printed books, legal legitimacy, medals or accredited diplomas – things which have been denied to OMNI on many occasions throughout its long life – to remember and understand the Never-ending Poetry Festivals; the Poetry Cabarets; the pilgrimages to the Corner on San Lazaro for the Health of Poetry and the Cuban people’s hidden energy; the Masquerade Parties; the alternative magazine launches; film screenings; public interventions, etc.

The system of his work itself led to the permanence of OMNI within popular consciousness for so many years. Focused on their work with the community, directly connected to its needs, OMNI has established a vital space for creation which has some of the previous standards from the ‘80s which it had moved away from, as it was facing a completely different context when it became sunk in the consequences of the Special Period.

They had very little space in Cuba’s visual art establishment: at the Jornada Nacional de Performance e Intervenciones Puente Sur – one of its participations involved moving a garbage container from Alamar to the place where the event was taking place and sitting next to it with wet suits, old masks and snorkels. At Visuarte Internacional in Cienfuegos, the 8th Havana Biennial, which they took part in without permission the day of the inauguration with a Confusion of sound; they attended the 9th Havana Biennial as official guests with the Alamar Utopico exhibiton at the Luz and Oficios Gallery in July-August 2009; etc. 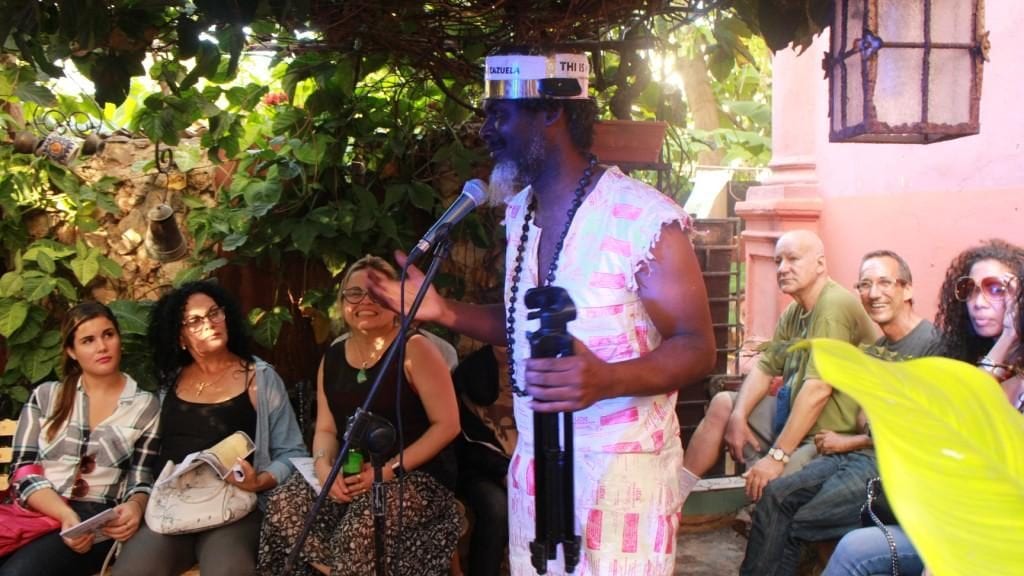 However, it’s preferred forum has always been alternative spaces. They are well-known for their collaborations with Rotilla or National Rap Festivals since 1998, creating the design of the Contest’s award, doing graffitis and making sculptures, body art and supporting the movement’s challenging spirit.

Another experience in the same vein was the music production and book Alamar Express, where poets, musicians, narrators with very different personalities all came together. Thirty-six art pieces went along the Spoken Word route, Slam poetry, Dub poetry, Rap, Regggaeton, the sound of type-writers, etc.

Carrying out an in-depth study about OMNI is difficult, it involves collecting testimonies, interviewing its participants, viewers, neighbors from the Eastern Havana community, accessing independent digital publications, the group’s archives; as such disperse and brief information like this, doesn’t give us an exact idea about the artistic phenomenon which they managed to give birth to. Going through the different stages of its growth process, OMNI-ZONA Franca, which branches off of Alamar’s Cultural Center and reaches times of great political and artistic radicalization, which touches activism, is a hard thing to label.

In order to accurately assess OMNI’s impact, you have to look at its different stages, learn about government institutions and their censorship, about misunderstandings, bureaucracy, the urgency for a necessary art – a trinity which includes society, poetry and needs – at the time it was created. And of course, understand its flexible structure, its perspective on dialogue, confrontation, and its excessive need to give love – even though this sounds cliche.

In tribute to OMNI’s 20th anniversary and as part of the Malditos de la Postguerra program which is being organized by Espacio Aglutinador throughout this year, a great event at Aglutinador’s base, located on 25th and 6th streets in Vedado, where energy buzzed again, took place on April 16th.