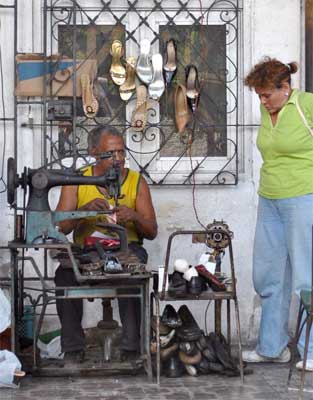 HAVANA TIMES — Shoe repair services are appreciated by many people I know. The lack of good quality shoes and the impossibility of an acceptable range require average Cubans to get their footwear mended time again and time again.

This is where there comes into play the key role of the shoemaker, who often performs veritable acts of magic that allow our continued walking along the deteriorated streets of Havana.

A few years ago there were three places near my house where they would glue, sew, reconstruct and secure shoes – one of them government-run.

Currently there’s not a single entity that functions adequately.

The two private shoemakers have stopped working almost completely, while the one that’s government subsidized has a longer story behind it.

This establishment, after having gone through a period of improved service, suffered changes in the way it operated.

Previously the client would talk directly with the shoemaker of their choice — which ensured the satisfactory repair of their shoes — and they would agree on the price.

Now a receptionist takes the defective shoes and collects the payment in advance at a price indicated on a large poster.

The first outcome: the shoe repair service has been left with almost no staff and those who work there never have the materials to do their job.

Second outcome: the neighborhood has lost an important place where — at an affordable price and without bungling — people’s shoes could be fixed.

Recently, after walking around half of an Old Havana looking for a shoemaker, my sister found one near Zanja Street, though to repair one pair of shoes it charged the shocking figure of 50 pesos MN (about the equivalent of three days of pay).

The patches stayed in place well, so she went around letting neighbors know where they could find the new “salvador de pies” (“savior of the feet”).

The trade of cobbler will always be respected in Cuba, since on more than one occasion they have prevented many people from having to go barefoot in the street.

So, here I’m expressing my thanks to them and calling the attention of the relevant government agencies to this nagging situation.

One thought on “Our Cherished Cobblers”