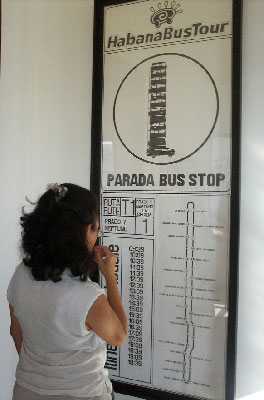 HAVANA TIMES — A two-artist exhibition titled Road Movie was inaugurated at the premises of the editorial office of Cuba’s Revolucion y Cultura (“Revolution & Culture”) journal this past September 26.

The authors of this metaphorical road flick, Guillermo Ramirez Malberti and Ernesto Domecq Menendez, are visual artists belonging to different generations who had never before shared a gallery space.

The common motif of the 17 pieces on display is the motorized vehicle, deployed by the artists in a tongue-in-cheek, satirical manner to reflect on a number of contemporary phenomena.

The camello (a large, camel shaped rustic omnibus employed during Cuba’s Special Period to address the drastic public transportation crisis experienced by the island’s capital), old American cars, vehicles used to gather waste materials, motorcycles and city buses (popularly known as the “Ps”) used to transport a great part of the population today are some of the vehicles invested with new meaning by Malberti and Domecq.

Through drawings, photographs, installations and paintings, the majority of the works on display recreate stories that flirt with the concept of the road movie, a film genre which portrays the psychological and social development of characters through the experience of a road trip.

Though a number of technical difficulties conspired against the opening of the exhibition (a power cut which lasted until 6:30 in the afternoon, for instance, made the projection of an interactive 3D piece impossible), the gathering was enjoyed by all who attended.

The works that comprise Road Movie will be on display at the Espacio Abierto gallery, located on 4th Street between 11 and Linea streets, Vedado, until October 25.

The second version of Malberti’s Pequeña historia de amor y desamor (“A Brief Tale of Love and Lovelessness”), which recently earned the artist a visual arts scholarship from the National Visual Arts Council of the La Vasija ceramic biennale, is yet another attractive feature of the exhibition.