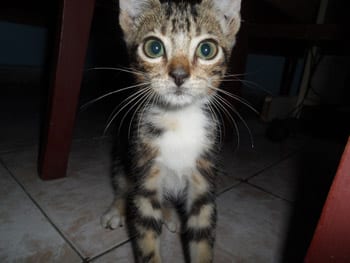 HAVANA TIMES — I’ve never had a pet. When I was a kid, my mom would come up with a million (admittedly good) reasons why I couldn’t.

An example was my sister’s allergies or the fact we didn’t have the needed conditions to care for an animal at home. When we had these, she still didn’t consider the possibility of owning a pet, perhaps in the interests of her mental health, given the numberless chores she had with two little girls in the difficult 90s.

The point is that I was never able to enjoy playing with a pup, kitten, pig or any other animal, and this perhaps distanced me from animals to such an extent that they began to inspire a bit of fear in me.

The ice broke while studying at university, when I was more or less forced to live with a street cat, which would sneak into the house I lived in at the time during the night.

Little by little, I became accustomed to its silent presence and agreeable company.

Our happiness, however, would not last long and, when it was time to head back to my place of origin, I could not take it with me.

A few days ago, thanks to a rodent that settled at home, my mom requested we get a cat and I didn’t think twice. The cat’s stay, I thought, could perhaps be prolonged later.

He (or she) was perfect! Friendly, loving, hyper, fearful and a bit too small for the task demanded.

The only night it spent in our home, I almost got no sleep. It wanted to play all the time and I was afraid it would break one of my mother’s precious vases.

But the cat was so friendly, so full of energy, that playing with it was no bother. I wanted for it to see me as its family.

I felt so good with it and my mother seemed so upset that I decided to return it the following day. I wasn’t going to go through the grief of seeing it go when my mother decided to get rid of it. Perhaps someday, when I get my own place, I will be able to settle this debt with myself and rid myself fully of this trauma.

One thought on “The Trauma of Never Having Had a Pet”