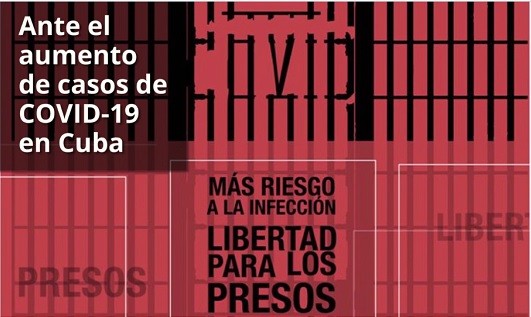 If you read the report presented in January 2020 by the organization Prisoners Defenders, we verify that Cuba has the highest prison population rate in the world, with 794 incarcerated for every 100,000 inhabitants.

There may be a little of all this, but not so much for there to be currently 90,000 inmates in Cuban jails; for there to be more than 200 prisons on the island. For us to be a country of prisoners.

Just under the law of Pre-criminal dangerousness, that is, without having committed any crime, there are 11,000 people deprived of their liberty.

Then there’s the group who are a doubly vulnerable population, the political prisoners, of conscience, that small group of confessed opponents and activists who are charged with fabricated common crimes to justify punishment.

Given the spread of COVID-19 in Cuba, all prisoners matter to me, but political prisoners hurt a little more.

Less than a year ago, a Lady in White, Xiomara Cruz, was the victim not only of the abuse of power by a system, but of its indolence.

While serving an inexplicable sentence, Xiomara became seriously ill in a place that she should never have inhabited, a prison.

Later, her diagnosis was hidden, her illness unattended, her health neglected by the Health Power that has medical missions in more than 60 countries.

At the moment, and faced with the threat of COVID-19, groups such as Estado de Sats, the Cuban Observatory for Human Rights, and independent activists and journalists, demand the release of 123 political prisoners. Joining these initiatives is the least we can do.

13 thoughts on “Why So Many Prisoners in Cuba?”