HAVANA TIMES — The Cuban Coast Guard has burned hundreds of improvised fishing boats of “informal fishermen.” The ships’ crews await the arrival of nightfall to spot the luminous buoys of these fishermen and then intercept them.

Many of the burned boats consisted of Styrofoam blocks reinforced with wooden planks, contrived watercraft that enabled families to obtain seafood that’s so scarce in Cuba.

From this has been developing a silent confrontation between the perseverance of the informal fishermen and the insensitivity and authoritarianism of the maritime crews.

The incidents take place mainly in the waters off semi-urban communities of the capital, especially those in areas off of East Havana. Every night, hundreds of informal fishermen take to the sea to face the dangers of the coastline, which include strong currents, shark attacks, the possibility of having a fishing accident and mistreatment by the authorities themselves.

With the passage of time, a fishing culture has been forming among these individuals. In communities like Alamar, people’s knowledge about fishing using Styrofoam blocks has been established.

This is the principal circumstance that makes it so difficult for the Coast Guard to eradicate or significantly diminish this type of fishing.

The Cuban government doesn’t accept citizens freely accessing the riches of the sea. They do not tolerate people engaged in this practice of “autogestion” (self-managed initiative from below) for family survival, since at the same time the state is responsible for the country’s precarious seafood market.

While I was visiting some friends in Alamar a few days ago, I saw from afar and from the ninth floor window, an array of lights that looked more like an alien invasion.

Julito, who was right behind me, explained that these lights were luminescent buoys used by the fishermen of the neighborhood to attract mackerel, a fish prized in contemporary Cuban culinary culture. 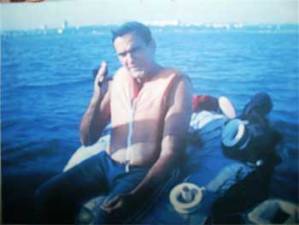 I was bowled over when after a few minutes, out of nowhere, there came a huge flares that overshadowed the luminous buoys. I asked Julito if that was a way of catching large fish.

Baffled as I watched the show, Julito shouted to his mother who was in the kitchen washing the dishes:

“Mama! This guy is lucky as hell” — talking about me — “He ate the last fillet that we’re gonna see in this house for a long time.”