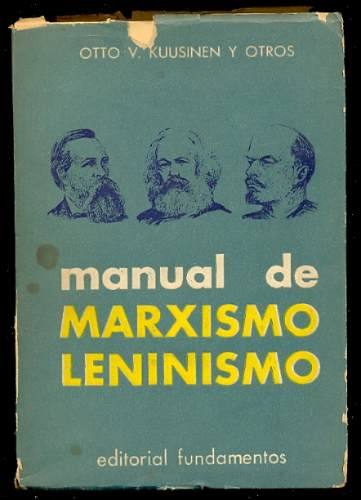 HAVANA TIMES – The fact “Marxism-Leninism” continues to be included in the syllabi of Cuban universities reveals the divorce between the economic reforms impelled by the Castro government and the political discourse it holds up as banner.

The Marxism-Leninism taught at our universities is one of the many versions of this theory that emerged from an apocryphal edition of Marxist thought, carried out under the Communist Party of the Soviet Union, which was combined by Lenin’s so-called contributions to Marxism.

This has led to some truly absurd situations at university classrooms. Let us consider, for instance, what takes place within the Economics program. This program must inculcate future economists with the anti-capitalist views of Marxism-Leninism while simultaneously train them to become neoliberal technocrats.

Can you imagine something crazier?

The version of Marxist-Leninist theory in circulation today is a homemade manual that attempts to update the ideological legacy of the Soviet regime and adapt it to Cuban reality at the close of the 20th century.

In other words, an attempt to update a theory which, at the time of publication, was collapsing across Eurasia and brining the entire socio-economic model of the socialist bloc down with it.

As though this weren’t enough, they would use such an updated Marxism-Leninism to confront a crisis caused by that very model.

It is so absurd that even the laziest student ends up realizing how insolent his Marxist-Leninist professors ultimately are.

A few days ago, a high-school student on the same bus I was traveling in had a blast analyzing the behavior of the driver using his Marxist-Leninist manual:

“Look at that, our driver friend is materializing labor with the bus, he’s razing the dialectics to the ground, that is true antithesis and a clear illustration of the class struggle.”

The absolute loss of autonomy by universities over more than 50 years has made all Cuban schools subordinate to a form of pedagogy that recalls medieval scholastics, a system further constrained by the iron-fisted political control maintained by the Young Communists League.

This situation annuls the possibility of any novel academic proposal and does away with creative freedom and any student criticism.

Beyond the inevitable fraternity spawned by their co-existence with classmates and professors, students end up silently rejecting this academic environment. This attitude makes Cuban universities graveyards, brimming with architectural elements celebrating knowledge and the arts and utterly devoid of academic culture and intellectual enthusiasm.

If this pseudo-scientific stratagem, which lost its political usefulness decades ago, continues to be taught at Cuban universities today, it is because of the monopoly of the educational system maintained by the Cuban Communist Party.

This has all been part of the regime’s political strategy: the control over public spaces and the daily life of Cubans. This way, universities have been part of the map of communist domination, emptied of life experiencies and a genuine gregarious culture.

This has been the case with numberless popular institutions, such as traditional festivities, neighborhood or professional associations, the freedom of assembly and many others. All have been dismembered and forced to recycle the political discourse that sustains a sense of belonging to the dominant imaginary.

This is why I consider any act of student sabotage vis-a-vis Marxism-Leninism a conscious or unwitting popular action against the authoritarianism and demagogy of the government and academy.

I never miss an opportunity to support or lead any initiative against doctrinaire education. Which is why I joined the performance offered by that high school student on the bus, when I claimed to discover the concept of “negation of the negation” in the sudden stops made by the driver.

7 thoughts on “Cuban Universities: Marxism-Leninism as a Terminal Disease”