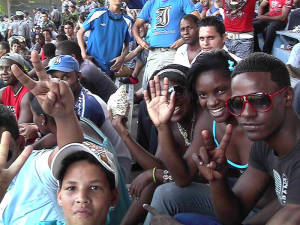 HAVANA TIMES — The state is nothing, the people are everything. This is why we see state institutions trying to prey on the popular enthusiasm for the current national baseball playoffs.

This is one of the few genuinely popular festivities that still survive in Cuba. And this is especially true in the capital, where the anti-popular policies of the state have been the most radical in their attempt to contain any civic potential that characterizes cosmopolitan cities like Havana.

Many people look forward to the playoffs so that they can in some way participate in an activity of the people. When a team in the series performs well, a miracle occurs. Nothing and no one is able to repress or oppose the joy, laughter and euphoria of its followers.

As the current Cuban baseball playoffs enter its final stretch, two provinces are favored to enjoy the divine grace of those temporary liberties and licenses conceded to the plebeian masses.

All that’s needed is for some significant occurrence in the playoffs to make known what remains of us as a people – with our hatreds and loves, but also still possessing shades of public-spiritedness, political judgment and popular activism.

Some days ago, just minutes after the Ciego de Avila team beat the Las Tunas squad in the quarter-finals, one of its members was surprised to see how the fans “hit the streets in celebration.”

In his province they waited for them to celebrate the last day of carnival, something I imagine must be quite special.

To be a people means needing to take part in activities involving collective and genuine emotion. Today the national baseball playoffs makes me feel like I have a sense of “the people,” it makes me feel a part of them…giving me a sense of us.

If the team from the capital wins, the city will re-live that collective ecstasy that many of us residents of the Santos Suarez neighborhood have experienced.

What will be decided on the playing field will be those who will experience the joy of winning the playoffs!

…even if it’s only a temporary political ecstasy in a society mired in the complete sclerosis of the state.