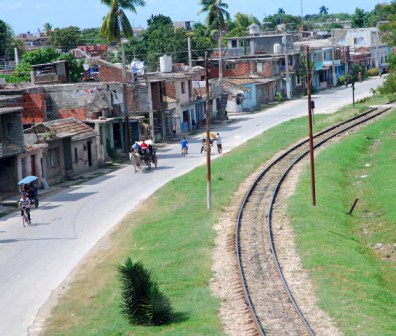 Last week on the train coming from of San Jose de las Lejas, which connects the new province of Mayabeque with the capital city, an incident of xenophobia occurred.

A few minutes after pulling out of the San Jose station, a heated argument began in the first wagon. A comrade with a baby in her arms triggered it when she said to another passenger, “I never ask you to let me have your seat!”

The passenger she was speaking to — a man beginning to get on in years — sat there justifying his not having given up his seat to the woman standing in front of him. Seconds went by, minutes passed, but nothing. Not a man, woman, young person or old person was prepared to cede their seat to the woman holding a baby.

Many of the passengers concealed their share of insensitivity after a moment of unusual interest in the unpleasant scene. People began to lean in favor of the little boy’s mother, which caused a look of shame to appear in the face of the man she was confronting.

Things were starting to move in this direction when suddenly, without anyone expecting it, everyone heard someone yell in a way that shocked all the passengers: “Hey, make the foreigners get up!” a man shouted.

The looks of those present were directed toward the row of seats occupied by two Bolivian students from the Latin American School of Medicine.

“Yeah, you guys, get up! No one’s going to waste more time, especially on this nonsense. Don’t you see that the woman doesn’t have anything to hold onto,” ordered the shouting passenger, badgering the Bolivian students.

Although the rest of the passengers remained openmouthed for several seconds, many ended up accepting their countryman’s impromptu demand as legitimate.

“They’re they go playing innocent”, was murmured all around.

In the faces of the Bolivians you could see an expression of fear that made me recall stories of the discrimination that Haitians suffer in the Dominican Republic, to cite only one example.

One of the Bolivians rose immediately and gave his seat to the offended mother. He looked around nervously trying to figure out was about to happen, but nothing did.

The train continued its journey without incident during the rest of the trip. It seemed like many of the passengers were absorbed with what had happened.

Some of the Cubans clearly regretted that something like that could have happened before their eyes, embarrassed perhaps by their not having had enough courage to defend the dignity of the two foreign youths. And this happened in our so-called nation of solidarity.

Perhaps this incident of xenophobia was the baptism for many here who try to wash their hands of the accumulation of conflicts that subsist in Cuban society, of those who call any Asian who visits us a “Chino” or any European who doesn’t have olive skin a “blancuzo”  (whitey).

“What a disgusting situation. I had never seen anything like that,” lamented my neighbor after telling me what she had witnessed.

3 thoughts on “Make the Foreigners Get Up”