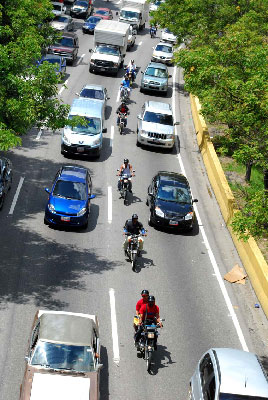 HAVANA TIMES — Though automobile prices are sky-high, Venezuela is still one of the Latin American countries with the most cars per inhabitant.

As one might expect, Venezuelan roads become jammed in the morning and afternoon rush hours. Combine this with the poorly-designed sewer system and its tendency to flood the streets during the rainy season, and you have a situation in which many people leave their homes early – and in their cars – and manage to arrive at their destination only at day’s end.

This is what has made Venezuela’s moto-cabs, or motorcycles plain and simple, a near-indispensable means of transportation. If you’re running late for an appointment, the best course of action is to get on one of these motorcycle-taxis, vehicles that have the capacity, dexterity and daringness to speed down the streets of Caracas, or any other city, for that matter, skirting “line-ups” (traffic jams), driving onto the sidewalk, sometimes even running red lights, and moving at a speed that no four-wheel drive could ever hope to achieve. 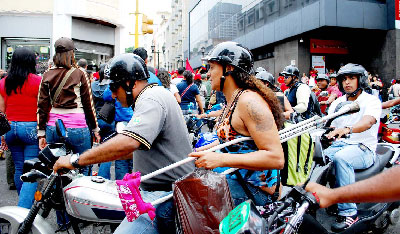 The best thing a driver can do is to try and avoid bumping into a moto-cab, because, almost immediately, 5, 6 and even more bikers will come out of the blue to defend the motorcyclist (even if he’s responsible for the accident), and they will often not be too kind about it.

You can see long caravans of moto-cabs at political rallies, and there are those, of course, who give them a bad reputation, claiming they are used for armed theft.

It is ironic, thus, that the drivers of these motorcycle taxis are frequently robbed themselves. Though gasoline is practically free in Venezuela, the same isn’t true of spare pieces for automobiles. Like in many other places around the world, selling stolen motorcycles continues to be a lucrative business here.

Despite all this, owning a motorcycle continues to be the dream of many a Venezuelan teenager.