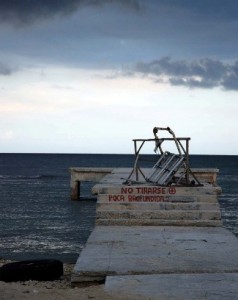 HAVANA TIMES — Six years ago, a friend of mine called me and asked me: “Would you be interested in letting a yuma (gringo) use your photos?” Put that way, it sounded awful. Immediately, however, he gave me a more serious explanation: “He’s an American who works as a translator here and he’s putting together a web-site. He needs a guy – or girl – to take pictures for the page.”

I didn’t know the gringo in question, but the idea excited me. Six years ago, I was beginning to work as a photo-journalist for a Cuban newspaper – a newspaper I will always be grateful to for having given me the opportunity to learn a bit more about photography out in the field, and even to travel some, without any previous experience and without even being a member of one of the two Parties (the one for young or the one for old communists).

As one would expect, most of the photos I took for the newspaper weren’t exactly a point of pride or cause for enthusiasm, so any opportunity to do something different was exactly what I was looking for.

That is how I met Circles, a gray-haired man who was quite definitely a hippy, someone who spoke Spanish with a very funny accent and had many ideas for photo features. It was just a handful of us when Havana Times started out.

During the first months, we even had the crazy idea of approaching the Cuban Journalists Association (UPEC) to become an accredited newspaper. I say “crazy” because, even though Circles had the best of intentions, there is but one intention for the Central Committee, the Party’s, and all others are either dismissed or declared enemy plots.

Even though Havana Times hasn’t been among the blogs most severely “criticized” or discredited by those at the helm of official Cuban journalism, there has been no shortage of attacks on its editor or bloggers.

To live in Cuba and to write for a site, magazine or news medium that isn’t official is a problem for anyone. What is written may or may not be considered truly critical by readers, but the mere fact of mentioning the dreadful quality of Cuban education or how the police mistreat a group of young people who simply want to have a good time in a public place, is enough to get a call from a some gentleman from State Security or whatever you call those government agents.

And we know that a single phone call can make life difficult for even the bravest among us.

I believe that is what all of us who write for Havana Times, and even those who participate in its fora, are: brave. For even if one does not live in Cuba, doing so can become a problem when one asks for “permission” to enter the country and see one’s family.

In the meantime, regardless of what anyone says from any of the political bands behind which people tend to hide, our blog continues to be independent, open to any ideology and opinion, from Cuba and about Cuba.