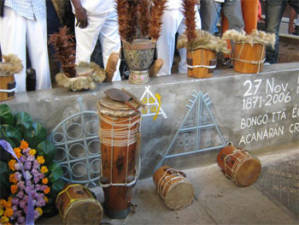 HAVANA TIMES, Dec. 23 — Havana residents marked the 140th anniversary of the execution of eight medical students by the Spanish colonial regime on November 27.

Like every year, the expansive stairway area in front of the University of Havana brought together members of the Federation of University Students (FEU) and other student organizations for their traditional pilgrimage across town to the monument located at La Punta, at the edge of Havana Bay.

Days prior, several media outlets referred to the deaths of several members of the Abakua sect for their actions in support of the medical students on that same day (November 27, 1871). This fact was also mentioned in the speech by the vice president of the FEU, Lisara Corona Oliveros, just before the start of the march.

Yet in both cases, the approach to this moment in history was carried out superficially.

The official news media have been slow to mention another set of parallel activities that have been conducted since 2006 in an effort jog historical recollection.

The entrance hall of the Casa Editora Abril publishing house was the meeting point selected to initiate this year’s alternative event, which lasted from 1:00 pm to about 5:30 pm on Sunday. The opening speech was delivered by two members of the Abakua Association of Cuba: Orlando Gutierrez and Ramon Torres Zayas.

These presentations dealt with the Spanish authorities’ massacre of five Abakua brothers who attempted to rescue the medical students before their firing squad executions. The speech also sought to highlight Andres Facundo Cristo de los Dolores y Petti, who’s considered to be the promoter of white men being accepted into the Abakua religion. 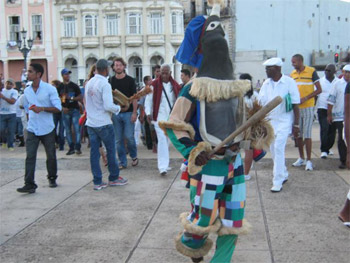 At the corner of the park on Colon Street (which had previously been the main meeting place of the annual event), turning out to show their support for this historic recollection were members of the Grand Masonic Lodge of Cuba, the Mercedita Valdes Group and the Rincon de los Milagros Project.

Another one of the groups that spearheaded the activity was the Hayde Santamaria Collective, which is in fact the group that initiated this tradition six years ago. Its members have also carried out research related to medical students and to the “whites” who were among the executed Abakuas. This group has been responsible for reviving a part of history that demonstrates official neglect of acts of racial discrimination.

“Irems” (Abakua devils) and the sounds of drums led the people’s procession of about 300. Unlike the university student march (which runs east-west along San Lazaro street), this one proceeded north-south along the busy Prado Avenue to the monument to the medical students.

The march was a celebration accompanied by music, rum and a banner that read, “We Can Accomplish Much with Popular, Community-based Workers Organization.”

This all served to remind us that this celebration has been organized and maintained by individuals and groups committed to the rescue of history from the people’s perspective, doing so despite the indifference of the officialdom.

Though it would be easy to belittle the march as a mere religious observance, its meaning transcends this to the point of pursuing a demand, reminding us of the call of Ruben Martinez Villena to clean away the mire of all types of colonialism.