HAVANA TIMES — Ludwig Tomescu is one of the best piano tuners in New York, after more than 30 years with Steinway & Sons. When in 2013 Manhattan School of Music professor Solomon Mikowsky invited him to come to Cuba for the first Encounter of Young Pianists, Mikowsky didn’t have to convince him.

“He told me that they needed a technician and I answered: ‘Well, that’s my dream — going to Cuba.’”

Last year, Tomescu was also here, changing hammers and strings. For six days, he worked eight hours a day, with the help of Onis Marín, tuner for the Historic Center of Old Havana.
“How’s the Basílica piano doing?” Tomescu asks, like a doctor asking about a patient. The Basílica Menor is part of the San Francisco de Asis Convent in Old Havana.

This year, for the first time, the Romanian-born expert is giving a master class for Cuban piano mechanics, tuners and repairmen. The classroom is the San Felipe Neri Oratorium, blackboard and all. Students come from Havana, Matanzas, Cienfuegos, Sancti Spiritus, Villa Clara, Granma and the Isle of Youth.

The class begins. With a poor memory for names, Tomescu is a Socratic teacher. “What do you hear in this fifth?” “Tell me about a situation you found.” The master prefers the essence, the classic methods. “The piano is an instrument that enters the body through the ears and that connection is lost when you use an electronic tuner.”

At the age of 19, he abandoned the idea of being a pianist, because he didn’t like the idea of practicing long hours and didn’t have money to go to music school. When he came to the United States, he applied for a job at Steinway & Sons and volunteered for the Air Force.

“I couldn’t be a pilot,” he says, with amusement. “Today I’d be dead or living in retirement on an island — in Cuba.” 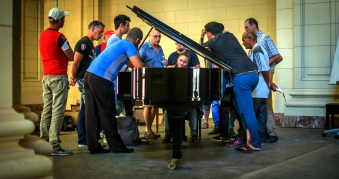 At Steinway’s he worked as a messenger and receptionist, although he always told his boss that he wanted to learn. One day they told him, “You’re wasting your time there. Why don’t you come and work with us?” “And that’s how everything started,” he says.

He learned to speak Spanish in the Big Apple, mostly because the workers in the shop were Dominicans. His spontaneity takes over. “Come on guys … hey, hey, quiet!… right! veeery good.” He does an improvised two-step; he hums. “I know that you Cubans are very musical, so this is going to be very easy for you.”

Tomescu has 380 clients worldwide. That information elicits an indiscreet question: “Do you charge to be here?” “No,” he answers, matter-of-factly. “Last year, the people of New York paid me, but these classes cover only my expenses. My time is a benefit I want to donate, especially because someone donated it to me when I started my trade in the States.”

This from the man who tunes the pianos at Lincoln Center and Carnegie Hall.

“I can improve someone’s life, his economic and professional situation and that’s something that one needs to give without being asked. To me, this is an investment, because I know that Cuba will develop and that you remember me when you need me and you’ll bring me over again.”

‘Either we have tuners or we have no pianos’ 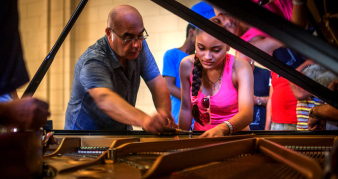 That statement is by Juan Félix Suero, who’s just getting started in the trade. He’s being tutored by Marcelino Campos, a fellow tuner on the Isle of Youth. Campos “is one of the few lucky ones with a Facebook profile,” Suero says. So Suero looked for videos and tutorials on the Internet and took the plunge.

In 1970, there were 50 piano tuners in Cuba, mostly blind or visually impaired people who had graduated from an experimental course created by singer Horacio Riquelme. Since then, there have been seminars and other modalities of teaching, but a piano-tuning school as such doesn’t exist.

Evelyn Arias studied the repair and tuning of musical instruments at the National School of the Arts (ENA) in 2005, the last year that the course appeared in the curriculum. The specialty became optional for music students. Most tuners have learned empirically, “sticking their heads in,” in the words of Rolando Antiguas, tuner at the Guillermo Tomás Conservatory in Guanabacoa.

Graduates of the 1970 Riquelme course are Flora Villarreal, Bonifacio Sánchez and Eduardo Torres. “One’s always learning something. The last card is always hidden,” says Torres. Flora, who tuned Frank Fernández’s piano for 20 years, tells how hard it has been to teach piano tuning.

“We have always raised the issue at the conferences of the Association for the Blind, asking it to set up courses and let us teach them, because there aren’t many trades in which we can work,” Flora says. “In some places, they’ve eliminated the post of tuner because they say it’s not needed.”

“Since 2009, I’ve been struggling to start up a school,” chimes in Bonifacio.

It is also a question of economics. Many pianos are damaged and abandoned. There are no repair parts or tools, so repairmen are required to improvise. There are no piano dealers either, and it’s difficult to import the instruments. 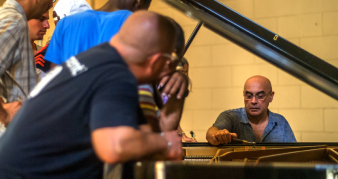 Tomescu says that he charges $185 for a tuning, $240 if he has to leave New York City. “How about that,” comments Bonifacio, sarcastically. “Here, people get hysterical if I charge them $10.”

In Cuba, a piano tuning costs at most $20, though in Varadero and other tourist centers, tuners can charge as much as $30. “At most, I do two pianos a month,” says Alián Rodríguez, a 22-year-old native of Matanzas.

Tomescu says that emergency solutions don’t contradict the culture of detail work, the perfectionism needed for the trade. “One needs that flexibility you have to find an alternative and do a good job.”

Alián is not altogether convinced. “If the instrument doesn’t have the technical conditions needed and we have to keep using recycled strings, hammers that don’t match … in the end, the sound will not be as good.”

The Third Encounter of Young Pianists will last almost all of June. Mikowsky will come again with his Manhattan School of Music boys and, when the time comes, all instruments will be ready, because Tomescu came as an advance party “to give the instruments a good hand.”

Luckily, the Steinways in Havana’s concert halls are in good condition. “Here, the pianos are well taken care of, kept in a very professional way,” Tomescu says. “It’s just that the climate, the humidity cause much damage and nobody is to blame.”

“Why is it so noisy here today?” he wonders. Well, we’re in the center of Old Havana, and the shouts of street vendors and the noise of bicytaxis and pneumatic drills fill the air.

“The process is slow,” Tomescu says, returning to the topic of piano tuning. “A lot of people want the job to be done by tomorrow, but it’s a job that requires time.”

The City That Never Sleeps is expectant as relations between Cuba and the U.S. continue to normalize, our New York visitor says. “The word is that a change is needed.”

The workshop will run until Saturday. While not teaching the course, Tomescu soaks in the flavor of Havana. “I walk around and eat. I love Cuban food, drinking a mojito, enjoying a cigar…” Havana and New York City are in the same time zone. That also helps.