HAVANA TIMES – British colonists arrived on the shores of what is now the United States in 1607. In 1619, a short 12 years later, the first black people were kidnapped from Angola and delivered by a ship known as the White Lion to the shores of Virginia.

White privilege on this continent had been firmly established.

Privilege can only exist if its lack also exists. Therefore, it’s in the best interests of those with privilege to hang onto it, and that means those who have it must keep denying it to those without.

Four hundred years after that white privilege was established, the first known death of COVID-19 in the US happened on February 6.

About two weeks later, Ahmaud Arbery, a Black man, was out jogging. He was killed by a former policeman and his son. Although there was no protest at the time, there was a large outcry and the men who murdered him were eventually arrested.

The virus began spreading, and on March 16, San Francisco Bay Area’s stay at home order began. Three days later, the order was instituted throughout the state of California.

Just a few days before that, however, on March 13, as the virus was building and spreading, 26-year-old Breonna Taylor of Louisville lay asleep in her bed. Breonna was an EMT. She was shot and killed by the police who burst through her door, executing a no-knock warrant on her boyfriend in search of drugs.

There were no drugs.

Again, there was no immediate protest but there was a large outcry against no-knock warrants.

All this frustration was in place when George Floyd was murdered on May 25th in Minneapolis.

George had paid for a pack of cigarettes with a counterfeit $20 bill. I have no idea if he even knew it was counterfeit. But in under 20 minutes, policeman Derek Chauvin had George handcuffed and was kneeling on the Black man’s neck.

George repeatedly asked for help and told Chauvin he was unable to breathe. People observing this called out to the police, telling them George had not even been resisting and was clearly incapable of resisting. Three other policeman stood by and did nothing to stop the murder.

Chauvin knelt on George Floyd’s neck even after he was unconscious. He remained on his neck for 8 minutes, 46 seconds.

With that, frustration in the Black community reached its limit.

Protests began the following night and soon they spread to over four hundred US cities and towns in all fifty states as well as in eighteen other countries.

On Monday, June 1, a young woman posted in a Bisbee community Facebook page that we should have a protest. Most commenters agreed with her but some said there shouldn’t be a protest because there could be violence and damage done downtown.

As one who has gone to marches and protests in this town for more than forty-five years, that concern sounded absurd. I was delighted a young woman had decided to organize this.

We assembled on Tuesday, most of us masked, at 6 in the evening at what’s called Grassy Park in downtown Bisbee. The official park name is the Copper Queen Plaza Park, but I’ve never known a single person to call it that. It’s Grassy Park. 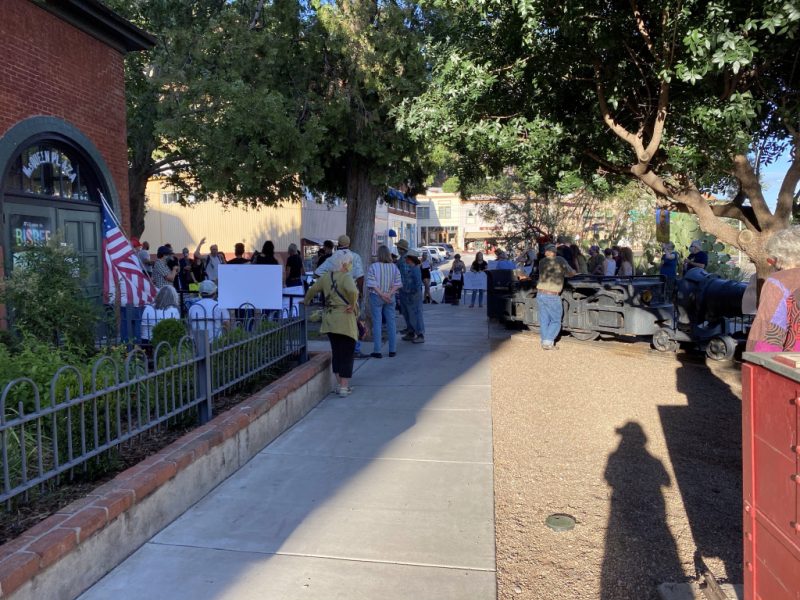 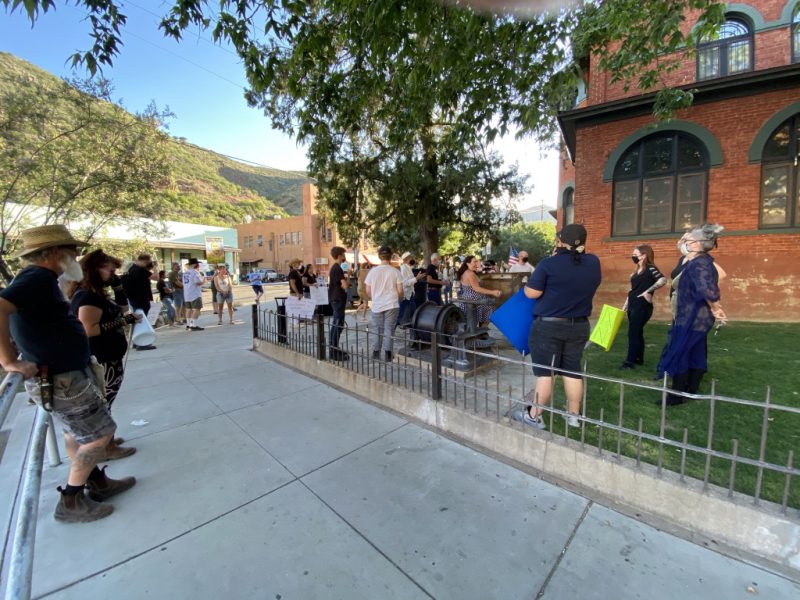 Members of the local police department had been invited to attend to march with us but none of them showed up. In fact, none of them even showed up to monitor the event because they were as unconcerned about violence as the rest of us.

In Grassy Park, names of Black people killed by police were read, and soon 75 to 80 of us were marching through town a half mile uphill to the Iron Man statue. 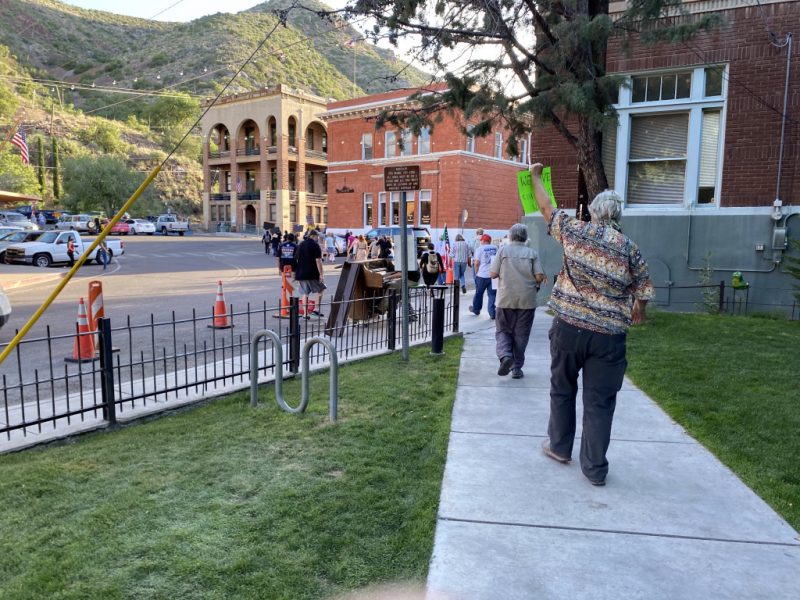 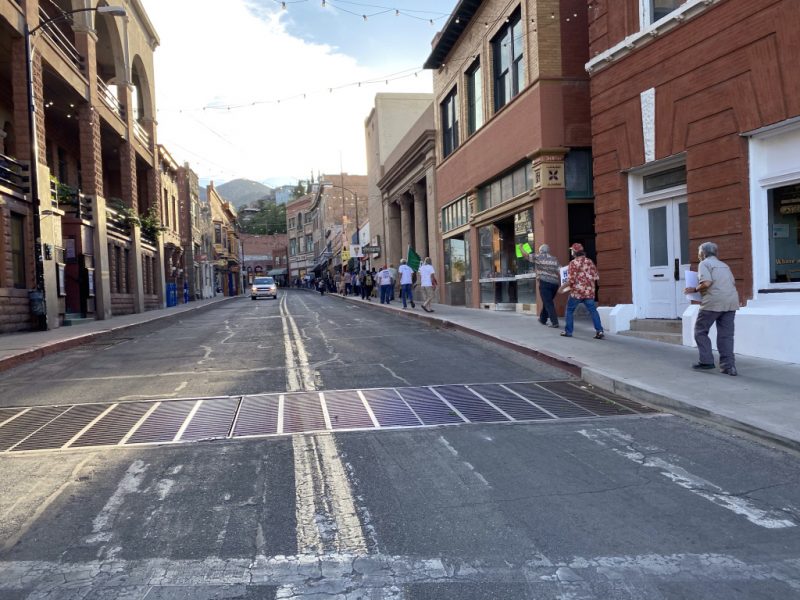 I found even the statue was well masked. 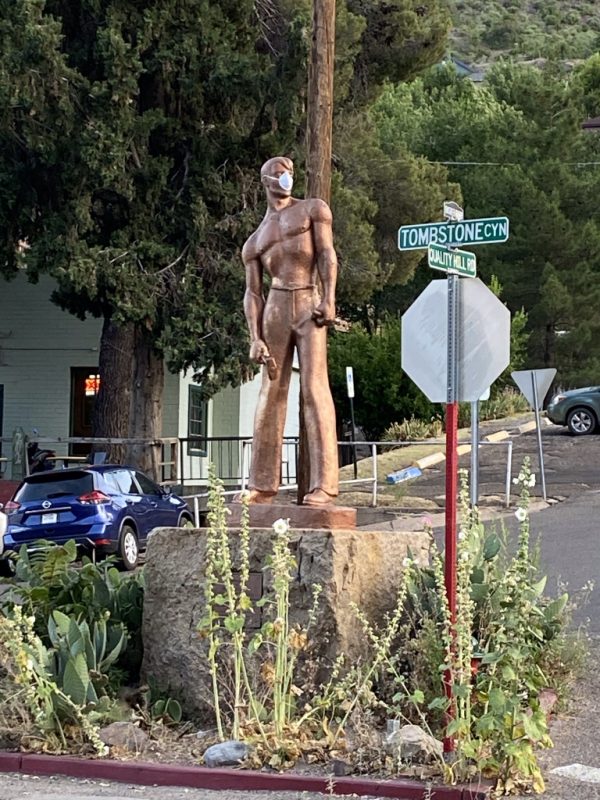 As marchers gathered around the Iron Man, a Bisbee man read names of the twenty people who’ve been killed in Arizona by police so far this year. Of that twenty, eight were minority men. That’s 40%, when the minority population in our state is about 23%. Others spoke of racism and privilege and police brutality.

After the speeches, the group returned to Grassy Park. 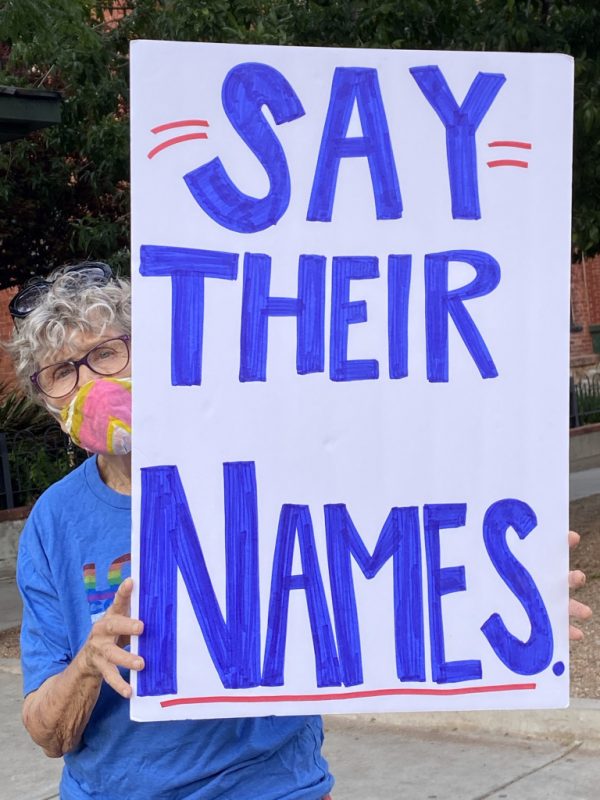 Tou Thao, J Alexander Keung and Thomas K. Lane, the officers who looked on as George died, have been charged with aiding and abetting murder. They watched for the entire eight minutes and 46 seconds Chauvin strangled George Floyd.

George Floyd’s life, taken because of a $20 counterfeit bill.

It is time for white-privileged people to understand. Black lives matter.

*Emilie Vardaman is a Havana Times contributing writer living on the US-Mexico border near Bisbee, Arizona.