A musical bridge from Cuba* 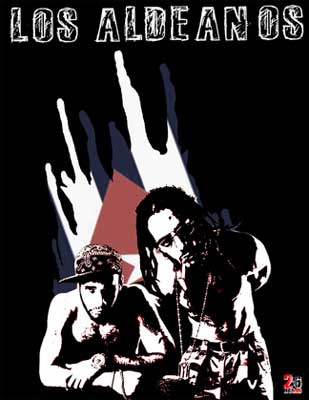 HAVANA TIMES — “Los Aldeanos” (The Villagers) is a hip hop group that has dared like none others to sink their fingers into the wounds of the Cuban government. In doing so, the duo has also become a kind of icon of rebellious music for millions of Cubans on and off the island.

Their lyrics — full of cubanisms — are sometimes popular and other times almost vulgar, touching on those areas absent from the agendas of official conferences.

Those words possess a rage that has been absent in the demands of the Cuban people in settings created for effect by the government – such as, for example, the meetings of the Committees for the Defense of the Revolution (CDR) or assemblies to discuss the “Guidelines” document of the Cuban Communist Party.

Los Aldeanos raise the flag for that part of the population which is the least heard or regarded. Instead, they too are ignored by those in power – it’s preferable for those who want to control everything to avoid eye contact with the harsh realities and problems on the fringe of their affluent neighborhoods of Havana.

The prolonged silence first occurred within people, when the government sought (and succeeded) to prevent any flow of information from the world onto the island. Silence was imposed almost like a gag when we started awakening from our shattered dream, the socialist dream.

So how do we want them to sing? Speaking with perfect grammar? With beautiful words that allude to a reality that doesn’t exist? About topics like those so painstakingly crafted by some rap groups but that have nothing to do with the spirit of the art form? The Los Aldeanos are the ghost of a dead body, haunting all those who are to blame for Cuba having fallen into the state that it’s in.

Its members — Aldo, “B” and DJ Figu, along with Silvito “El Libre” — hit the streets and find inspiration from what they experience. Hence their prolific quality is imprinted by the spontaneous airs of their songs.

Some of what they sing is anecdotal, as is the case of the song “Hotel Nacional,” one of those magical places where any Cuban has the opportunity to enter but which has become almost mythical in the minds of our people.
Discrimination, surprise, a sense of guilt and frustration are four of the feelings that dominate any Cuban in their experience with that hotel.

Discrimination is committed by employees of the facility, while surprise is what is felt when finding such abundance that one has never (or rarely) enjoyed in their own life, and to which — being so unaccustomed to it — they react in such strange ways.
Feelings of guilt arise from the absurd associations that come from our being saddled with concepts like sacrifice and patriotism, manhood and strength, abundance and bourgeois, bourgeois and evil.

And frustration emerges when one finds out that the time they were allowed in the hotel is over. It comes from the realization that this dream come true will never again be repeated.

But what did Aldito really find at the Hotel Nacional? Nothing special, only those things that everyone should be entitled to: adequate food and a clean, friendly and comfortable atmosphere. This is probably the best hotel in the country, but even in one that was less luxurious this same Cuban would have been able to experience and feel similar sensations.

“(This is a story based on real events). My story begins / in a strange way, Aldo entering the Hotel Nacional, walking on the carpet. Suddenly a doorman / treats me rudely, as though he / were the owner of Hotel California. I stand there quite contentedly, in front of the elevator, I can feel the temperature changing and can smell the freshness. That same man then asks me / ‘where’s your card,’ and something inside me said: ‘Aldo, don’t give him a backhand. Go on back down to the lobby, where workers were looking at me / like a dried bouquet among the flowers.’ They then ask for my card, without a ‘good evening’ or an argument, but I’m not going to let their bad manners get to me right now. Finally, the whole predicament is over. I go into the elevator / and push the seventh floor button myself.

“I find myself in a hall / like out of a movie. I get to / room 761. The games begin. The first thing / I think of is to go to the bathroom and use up all the little bottles that say shampoo. There are ten towels for me, and even though that seems crazy, I take my shower while thinking about the water pump in my building being broken.

“I get out thirsty, happy and dancing around smoothly. I found the minibar that was locked. I dialed 138, room service, just in case / they have alarms on the mattresses. I was invited here, everything was paid for, and suddenly I tell myself, “hey, how come another order?

“To make a long story short, we ordered a bunch of stuff (chicken, beer…) the kinds of things / Cubans enjoy. Every time they knocked on my door / I hid, I don’t know why but I was thinking it might be the police. I was eating so much on that mattress, I felt / I was betraying my revolution.

“Look, what a situation, on the paper with the phone extensions / it didn’t show 106 for all of this, but I said, ‘yes, gentlemen, we’re going to drink, eat and sleep without pressure, this is a holiday with a capital F for Flint with Aldo – congratulations.’

“I had more ideas, like going to the pool. But to get me outta there I would have had to hire a “Hi-man” (a strong guy). That was what I was thinking, so I didn’t leave the room. “Pool? What are you talking about Aldo – you better eat all this bread and ham.”

“On another day I went to the Malecon seawall and dived in, I came out and had a snow cone spiked with rum. Then I took such a dump that I said to myself, ‘this isn’t quite right’ (boy did it stink), but that toilet could flush and get rid of more than a brave grandmother.

“I omitted some details, like — for example — you could run the air conditioner all the time. When you take a bath, the mirror always steams up, because there was of course cold water and hot water.

“It was water / that filled you with life, it would caress your body when it cascaded down on you. You could see how good I felt and how my very soul was moved, I wasn’t bothering anybody; I was just taking a shower in piping hot water.

“I turned on the TV, and to be honest, I got kind of mad that the channels / were all foreign. They had a lot of CNN and the Cartoon Network, but I was hurt because I wanted to see / some educational channel.
“I finally had to go down to the lobby. They came looking for me. I knew that later they weren’t going to let me come back. And that was / what happened to me later for not looking like a yuma (foreigner) or being able to speak English.

“Since such happy moments / will not be repeated / I took a number of photos, you would have thought it was my sweet sixteen party. I left outta there like a lynx / that didn’t have anything to eat. And when I realized it, I had taken a glass without meaning to.

“I took a taxi home, because they paid for it of course, since I didn’t have a dime, and those are a little expensive. I got home and I paid the driver / and said goodbye to my Hotel Nacional, where only the tourists are treated well.

“Chorus: At the Hotel Nacional, everything seems normal, but it’s not – it’s something different. The security guy hassled me as if I had planted a bomb. Here I was just somebody who wanted to go in, see how it was, look around, observe and get to know it, because / life is too short. I don’t understand why right now in my own country Cubans are harassed by other Cubans.

“I just want to thank the guys with the walkie-talkies for being so cool, for the Mesa Redonda. It’s that this is what I don’t remember: the rich flavor of fuckin’ kool aid, I can’t take it, since there’s no smell of a hard-currency store or arriving wearing nice tennis shoes, may God forgive me. Let me be the president so you can see what it is to make cuts in personnel; oh yeah, don’t try to overshadow me.

“(That’s why when you get to those places ‘the flies stick on the wall,’ meaning that people act up and do all the things they do. It’s because they don’t give us the opportunity).

“Even today I remember everything that I ate. That breakfast that was so good / that the B got lost. There was that tasty yogurt, coffee with cream, a sandwich and juice, and then back to bed again; the beautiful windows overlooking the Vedado district; those curtains that to me looked like something by Calvin Klein, and that seriously laid out closet. Plus, they had those elegant nightstands and lamps. The floor looked like heaven, and I wanted to live there forever.”
—–

(*) A Musical Bridge from Cuba: This is an effort to find new bridges that promote communication between peoples of the diverse regions of the planet. I will be using simple narration in a series of articles to connect with those who are interested in the messages transmitted by Cuban songs, which due to their limited commercial potential and the difficulties posed by their translation, languish in a state of communicational stagnation – despite their being true jewels of Cuban culture.