HAVANA TIMES — This year, I was invited to take part in the Pinar del Rio carnival celebrations. There was a healthy and festive atmosphere in spite of the suffocating heat and the exorbitant prices of food on offer at kiosks.

The smell of oil that’s been reheated over and over again, where they were frying chicken, fry-ups and pork steak was overpowering, but people were still enjoying it.

In the distance, a large group of children were gathered. I thought that maybe it was because of the Ferris wheel, bumper cars and the carousel, but when I drew closer there were two goats under the sun with a really tight harness on and a carriage behind, carrying children who were happily getting on again and again for five pesos a ride.

I was there until it got dark and the goats were still working. Can the goats deal with this load? Can they put up for so long without water and food? I asked the owner and he told me that they are trained to do this.

In Cuba, there isn’t a Law that punishes animal abuse and of course, it’s not just goats who suffer, horses are also harmed in front of everyone, birds get hit by stones that children throw at them, stray dogs and cats are slaughtered and there are cockfights and dogfights.

Abuse isn’t only beating animals up but not giving them water and food, not looking after them when they get sick and leaving them to their own fate. In other countries, animals are looked after and protected.

In Cuba, where so much is said about us getting rid of social indispline, we don’t take the issue of abuse into account. This issue also involves the subject of religious sacrifices, where rams, tortoises, roosters and pigeons are sacrificed every day and thrown out onto the street.

We need a law and we aren’t asking for a favor or a gift. This is something that will make us a lot more sensitive and consistent with the need to look after and maintain everything that surrounds us.

When hurricane Irma hit our shores in September, the number of domestic animals and other species that were abandoned shot up. Some neighbors who sought refuge in schools, government institutions and other places left behind their pets and when their homes completely or partially collapsed, they were found floating in the water. 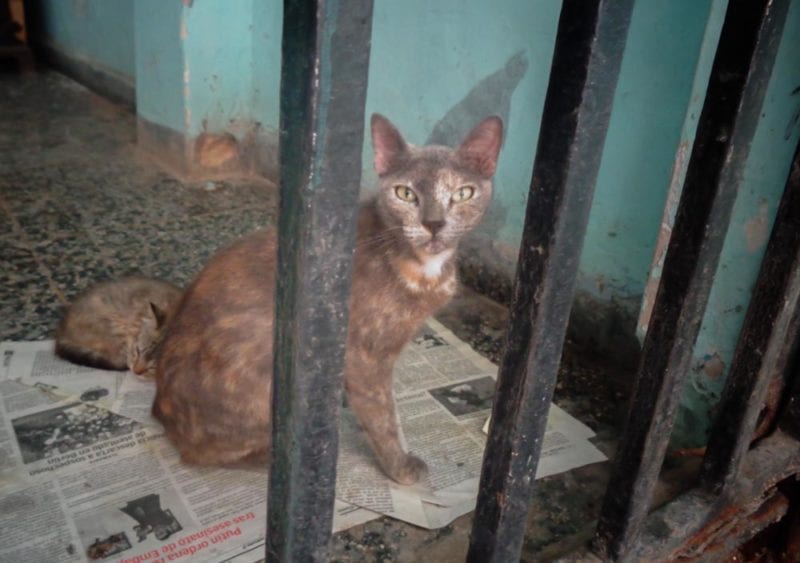 There are people who are interested in taking part in projects to help protect and look after animals, be that non-governmental organizations or volunteers.

The day after carnival, I left early to go for a walk, the sun was coming up. I found the goats eating grass on a plot of land near the park, without their harnesses on and the carriage. The owner asked me if I lived around here and why I was so worried about the goats, I remembered a phrase which I comes from Leonardo da Vinci: “Truly man is the king of beasts, for his brutality exceeds them.”
—–

One thought on “Abuse Isn’t only a Beating”