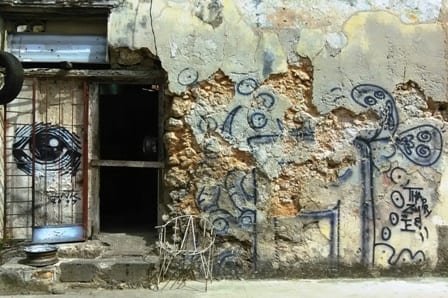 HAVANA TIMES — There are hundreds of drawings, some of which are murals that are over 20 meters wide, making the most of the faded white which prevails on walls of buildings that have partially collapsed over the past few decades. The pictures challenge neighbors’ and passers-by’s intelligence with their meticulous and thoughtful creation..

Even though Cuban people are reluctant to give their opinions, there are always exceptions, Mr. Leyva lives next to one of these galleries, which he has rather rejected from the first stroke. “Two of them came here, a couple; it was less than a year ago. They asked for permission out of courtesy and then they started scribbling on the back wall. They took a while, I’m sure they must have had some kind of authorization because here (in Cuba), you can’t do anything without an order.”

Leyva ends by pointing out the existence of other paintings nearby, we spoke on Division Street, on the corner of Penalver street, in Central Havana. 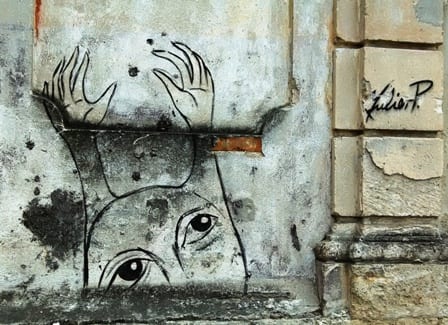 These are complex series where the ins and outs of crude cement are used, probably because the limited resources available to people who live here didn’t allow for anything else. It’s strange, the door was open, there was a chair out on the pavement next to the house, but in this country of the nosy, noone came out to see what was happening.

However, there are always sensitive souls and Nerys, a mechanical engineer, kills the time by waiting for the casual barber, a chance to discuss, because he is an exception, he is both an observer and intuitive thinker:

“The man with the covered face really caught my attention, in the same way policemen who chase a drug trafficker, hiding themselves from the dangerous druglords.”

It’s no wonder, the message this time is strong, it is repeated in many paintings where a simple maths calculation stands out: 2+2=5, sometimes followed by a question mark. 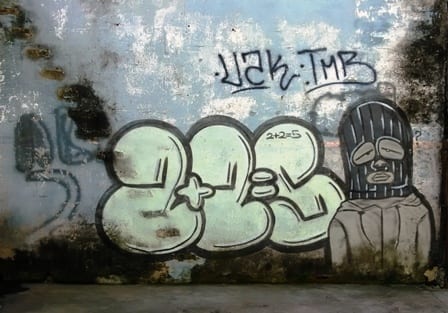 “It’s that in Cuba, things don’t add up,” explains Nerys, “here wages end up like this (he closes his thumb and index finger on his right hand), people embezzle at work, a lot of people live off of what is sent from another capitalist country, mainly the United States, however, they shout out slogans to the rest of the world which contradict with their sources of income and their lifestyle.”

It’s time for the heated question: Is this the dilemma that the face of a malevolent Che’s face comes from? I ask ironically.

The other person smiles in the same way Ernesto Guevara does colorfully reproduced on Infanta street; there isn’t enough space in this short online report for the long debate we had. 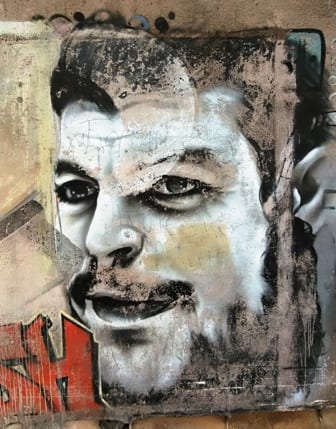 Other details that catch our attention, for example, the repeated illegible phrases, maybe signatures and messages at the same time, except for Yulier P who presents himself as a woman in a small but striking portrait, part of his painting skills expressed in other works.

There is more than enough to stand for a long time looking. These paintings, which weren’t made even a year ago, deserve to be shot by this lens that millions of mobile phones make use of to capture countless trivialities every day in the Cuban capital.

The indifference of this man, who just stands in front of the wall full of paintings which are both suggestive and enigmatic, comes from somewhere. Maybe the old man doesn’t understand the paintings because Life hasn’t given him the proper answers, while children play next to the monsters without noticing that the math that they learn at school is of no use to them here.