HAVANA TIMES — Every afternoon, this Guarachero (a type of Cuban music) par excellence, in life and in music, can be heard on Obispo street, the main street where tourists and Cubans go into Old Havana. People around him went into a frenzy this October 28th when he sung one of his improvised choruses: “You have to make sure you don’t get Dengue, Chikungunya and many other things.”

Double meanings appear throughout his musical set. Arsenio is blind, a lady next to him makes sure that nobody robs him of the money that passers-by kindly put within his reach, people don’t stop taking photos and making videos, the woman tells me: “He can’t be hired in Havana because he’s from another province, he needs a legal address here in the city.”

And this is happening while the TV boasts at the top of its lungs, “The capital of all Cubans”.

An original show, the man sings along to his guitar, accompanying maracas on his right leg, the harmonica hanging from his neck and one of the animals plays the guiro, according to the complicated combination of his attractive dolls, led by a toad on his head, ready to take a big shot of “Planchao”, Cuban ron that comes in cardboard packets. 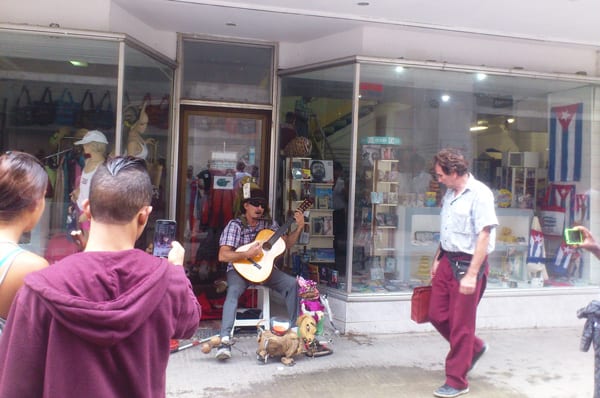 The sullen “captain” puts a CUC – the equivalent of a US dollar – into the funnel on top of the slot that the goat has on his back – his wife warns him and comments: “Push the coin down properly, you don’t want people to steal it from him afterwards. People, how awful, what has become of Cuba, after so many promises.”

There is no shortage of jealous onlookers, a strong man, wearing a tight shirt that emphasizes his muscles, sweating because he’s been walking up and down Obispo chasing after tourists, shouts the diatribe: “He’s becoming a millionaire just by sitting there.”

The reality of this one-man band and his dolls is another; the woman looking after him states: “there where you see him, he’s blind and he’s paying a 1500 peso – CUP, Cuban peso, 25 to the dollar – fine, not all of the policemen here are tolerant and there are other artists who are jealous of his freedom, taking away their audience they say.”

He plays La Bamba in true Cuban style, other songs that he himself has composed, it’s impossible to forget the haunting lament that is reminiscent of Zoe Valdes: “I dont know what my life is worth, but I’m going to give it to you.”

Fashionable in Cuba today, he has the two everlasting flags in our history, both of them red, blue and white with their stripes and stars, taking inspiration from the French Revolution, where the US’ independence would be the prologue and Cuba’s independence the epilogue. The singer highlights the friendship between both countries, between all of the people in the world, giving special emphasis to “the unity here, among us Cubans.” 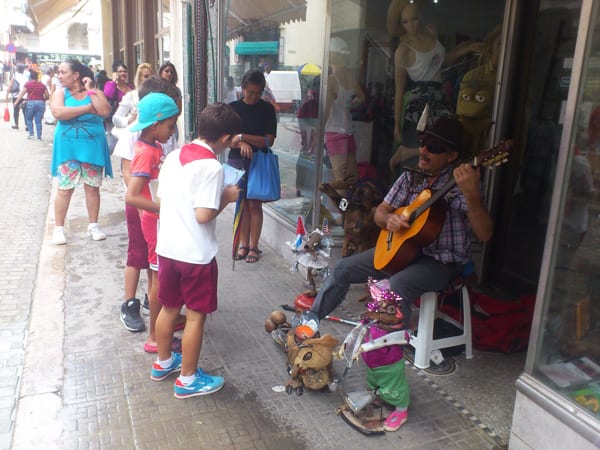 It literally doesn’t stop raining, after a lucky break in the cloudy afternoon without rain, the downpour returns and this is how his performance ends. Trying to ask new questions was impossible in the face of the protective woman’s warning: “It’s bad to draw out this conversation, it stirs up some policemen’s bitterness, and there are plainclothes policemen here too.”

“I’ll try to get hold of an ID card with a Havana address somehow, I’ve been wandering for three years now, I’ll never stop struggling, I’m called Arsenio Pena, at your service.”

Before that came the investigation about his delicate situation in the country’s capital city. The artist prefers to remind us that all of us who live here have problems, which relate to the last 57 years, which seem never-ending, and that’s why he responded with a popular guaracha with a double meaning which was sung by the censored Pedro Luis Ferrer:

“Carapacho Pa la Jicotea, why are you walking so slowly, Nature had this brilliant idea.”