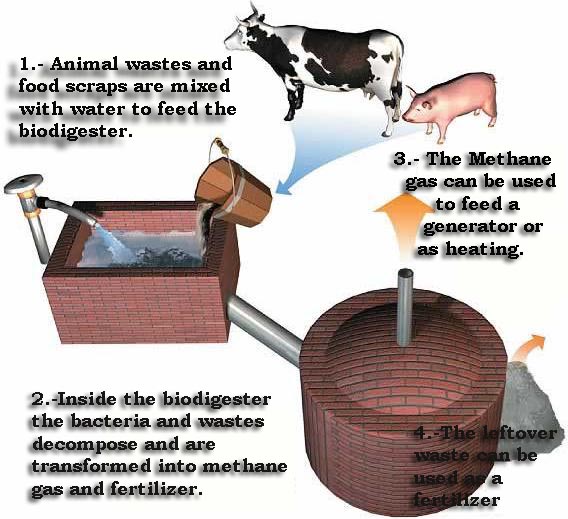 HAVANA TIMES, July 11 (IPS) – Some 700 biogas plants operate on state farms and in the private farm sector in Cuba, where this technology is being produced to conserve energy and protect the environment.

Biogas is a mixture of methane and carbon dioxide, with small proportions of hydrogen, nitrogen, oxygen and sulfide of hydrogen.  The gas is obtained from decomposition in an anaerobic (oxygen free) environment of organic waste, such as animal manure or vegetable waste.  It is being used for lighting and cooking, reported the local media.

Besides, the energy produced also has the advantage of releasing few polluting agents. At the same time a by-product is a biodegradable organic fertilizer.

Its use in Cuba is essential in the effort to maximize the development of renewable energy resources and to reduce the consumption of traditional ones, indicated sources from the Ministry of Agriculture.

Given its positive qualities, biogas merits more attention and use across the country, stressed the local media.

For 2009, a project was announced to assemble a modern biogas plant that employs German technology.  It will be constructed in areas neighboring the Pork Processing Complex in Palmira, in the south-central province of Cienfuegos, though details about this plan have not been disclosed.

The biogas producing industrial plant promises to place Cuba at the vanguard of this technology in the Caribbean and Latin America, said sources in the province.

When announcing the project at the end of last year, government officials indicated that the first objective of this investment is to protect Cienfuegos Bay from highly noxious solid waste effusions that originate from the Palmira Pork Complex.

Every year, 100,000 cubic meters of organic waste are dumped into that bay from the municipality of Cienfuegos alone.

The financing of the industrial plant will come from the funds allocated to the Cienfuegos Petrochemical Complex’ Endogenous Initiative as part of its ecosystem preservation program for the southern bay.

Likewise, in 2008 a biogas plant was inaugurated in the capital, where processing of solid waste with environmental advantages was previously nonexistent.  Despite the expended and foreseen funding levels, the plant’s potential is vastly greater.

The island also has possibilities for using biogas for electric power and thermal cogeneration by using byproducts from the sugar and coffee industries, in addition to the decomposition of organic materials, which is already being applied in Havana.

Cuba has the potential to produce more than 400 million annual cubic meters of biogas annually, which – if administered appropriately – could run an 85 megawatt electricity generation plant to produce more than 700 gigavolts per hour per year. By doing so, this would avert emissions of more than three million tons of carbon dioxide and would save around 190,000 tons of oil.

In addition, two million tons of organic fertilizer would be obtained per year, simultaneously decreasing the pollution load, with the city of Havana and the provinces of Havana and Pinar del Río being those areas with the most potential reported the same media sources.

The biodigesters are part of an environmental energy program that includes 45 countries as part of a world movement in support of achieving sustainable and cleaner production.  The gas can be used to produce electric power by means of gas driven turbines or generating plants, and in ovens, stoves, dryers, boilers or other combustion systems adapted for this use.

A Havana Times translation of the original article published in Spanish by IPS.

One thought on “Biogas in Cuba”