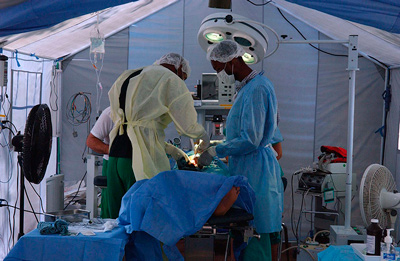 HAVANA TIMES — An epidemic of enormous proportions has broken out a few kilometers away from Cuba and the United States – a tragedy the UN is comparing to the Ebola outbreak in Africa. In Haiti, cholera has already caused 8,813 deaths, and as many as 725,608 people are thought to have been infected since 2010. Last year, 30 thousand new cases were reported.

“We’re facing the worst cholera epidemic in the Western Hemisphere. This is the worst health crisis today. We need more capacity to prevent new cases and care for the ill,” said Pedro Medrano, UN coordinator of the Haiti cholera campaign.

“The support we’ve had from Cuban medical brigades has been exceptional,” the expert recognized, adding that he is visiting Cuba in search of greater assistance from the island (which currently has 650 health professionals permanently based in Haiti).

“We are looking to broaden South-South cooperation and we will be approaching the diplomatic bodies of other governments, such as Norway and Chile, which are currently supporting our work through Cuba,” Medrano explained.

Medrano tells us one of the most severe problems they face is the worldwide vaccines shortage, and that he has high hopes set on the vaccine Cuba is developing, which has already shown very good results in an international experiment.

“It is still being validated, but the results are very positive. Some protocols report an 80 to 90% effectivity rate, and the vaccine is designed for the same strain we find in Haiti. We were told it is very close to being patented and that production will start soon after.”

Vaccine stocks in the market are always very limited. The reason is that they are generally not produced to supply populations in risk zones but for use by those who visit these from other countries and have greater purchasing power.

They explain that, today, vaccines are very expensive and beyond the reach of those nations that need them most, but they believe that, owing to its “spirit of solidarity”, Cuba plans on producing these at prices that are affordable for populations living in high risk zones.

“We would buy the vaccines, though we’re not ignoring the possibility of a bilateral cooperation programs. The important thing is to know that we will have enough vaccines,” the UN envoy said, adding that they are also looking for countries to finance production in Cuba or to commit to buying the vaccines for Haiti.

“We want to vaccinate some 300 thousand people this year, we need to work in prevention, and that’s one of the ways to do that,” Medrano pointed out and added that “the issue goes beyond vaccination. We need medical attention, which greatly increases the chances of saving a patient’s life.”

“Cholera isn’t what’s killing people. The great problem in Haiti is that people are dying because they never make it to a medical center, they never get adequate treatment. That is why we need to strengthen our mobile health teams,” said the UN representative.

“The Cuban government has given us guarantees that the work of its medical brigades will continue. We are also thinking of taking advantage of Cuba’s experience in preventive work through community education,” indispensable in a country that doesn’t have enough sanitation systems, where only 77% of the population in cities has access to drinking water and less than 50% in the countryside.

“The way to eradicate cholera is to make drinking water and sanitation available, but, at the current development rate, Haiti will need 40 years to catch up to the rest of Latin America. The issue has to do with poverty, but, since we can’t wait until the root problems are solved, we have to take action against the epidemic now.”

Cuba is becoming one of the UN’s “blue helmets”, intervening in health crises around the world, but we shouldn’t lose from sight the fact that, though the island’s human resources are many, its economic ones are highly limited.

Developed countries that do not have the capacity to deploy a medical brigade to work out in the field on a permanent basis could finance Cuba’s health campaigns, as the Norwegian government in Haiti is doing today, for instance.

Cuban negotiator Josefina Vidal [in the talks with the United States] announced that Havana and Washington plan to set up a commission to review the issue of cooperation in the health sector. Haiti could prove the perfect stage for such cooperation, considering the danger posed by the potential spread of the epidemic and the geographical proximity of the three countries.
—–
(*) Visit the website of Fernando Ravsberg.