By ELSA CLARO for Progressive Weekly 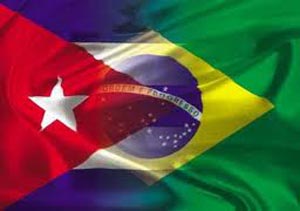 The trend is rising, according to basic data: In 2011, the bilateral trade exchange rose by 45 percent, compared with 2010, when it totaled US$501.4 million. This year, it is expected to close at $1 billion.

In other words, there’s a 15 percent growth in comparison with 2011. As expected, the balance favors Brazil, but the compensations toward the island are increasing.

Visits by the Minister of Development, Industry and Foreign Trade, Fernando Pimentel, in late August, and Minister of Health José Gomes were preceded by the visit paid by President Dilma Roussof in late January. In all cases, the high-ranking leaders were accompanied by functionaries and active businessmen who represented various firms.

Although the media references have focused on the Mariel works, that’s not the only sphere that attracts the Brazilians. Seventeen Cuban firms are already exporting their products, especially those with a clinical or veterinarian application, cement and nickel, as well as services in medical specialties.

In the field of biotechnology, contracts have been signed for the use of Cuban patents. One involves the transfer of technical data about the pharmaceutical Interferon. Also, there are contracts for the supply of Heberprot-P, a medication of proven effectiveness on diabetic patients with foot lesions.

Since 2006, Cuba and Brazil have moved ahead notably in the pharmaceutical sector, through an association for the development of research and high-technology products for the treatment of diseases like cancer and diabetes. This is in addition to vaccines patented by Cuba.

“We want a lot more. We want to attract more Brazilian companies that can produce here [in Cuba], that can take advantage of Cuban technologies that don’t exist in Brazil, in vaccines and medications, for example,” said José Felicio, Brazil’s ambassador to Cuba, in statements to Cuba’s national television.

The size of Brazil makes it a big market because, despite the development it achieved in recent decades, it cannot cover by itself the needs of its population (195 million inhabitants.)

The axes on which Havana-Brasilia relations turn are sustainable association and principles of reciprocity and mutual benefit, said minister Pimentel, who was one of the first to address the participation of Brazilian companies in the modernization of the island’s tourism industry.

In other fields, it’s important to cite the Brazilian plan to renovate the nickel plant at Moa, and the Cuban links with Petrobras for the exploration and production of crude oil in Cuba’s Exclusive Zone in the Gulf of Mexico. The Brazilians also offered to build a lubricants factory. A pact on the treatment of solid waste has just been signed.

The Brazilian diplomat’s wishes have solid bases, such as the performance of the glass manufacturer Fanavid, who wants to establish itself here in Cuba.

Marcopolo, one of the largest builders of buses, also signed a contract to build bus bodies in Cuba.

The Agency for the Promotion of Exports and Investments (APEX-Brazil) has had experience in various dealings with Cuba. At the FIHAV 2012, the industrial fair that just ended, APEX’s director general, Hipolito Rocha Gaspar, confirmed his company’s interest in promoting exports, investments and bilateral business.

“Brazil is intent on accompanying Cuba in its development through joint work in major sectors with great socioeconomic demand, such as agriculture and cattle raising, public health, the scientific research centers west of Havana (with technological transfers and purchase of products), education, computer science, energy, public finance and tourism, among others,” said Rocha Gaspar, giving an idea of the breadth of the projects under way and on the drawing board.

“Brazil can contribute much to Cuba, much technology, equipment, modern machinery. The priority will be agriculture, the field of foods,” Rocha said.

In the field of farm foods, both countries understand each other well. Cuba buys food from Brazil, whose government has granted Havana credit to import machinery for Cuba’s food development program. The credit line is $200 million. So far this year, Cuba has used $70 million worth of credit.

The purchase of novel technology for the sugar industry, cane cutters and other elements intended to rehabilitate a sector that has seen better days, is among the transactions done or about to be expanded. In fact, Brazil has become the leading country to make investments in that sector.

A subsidiary of the powerful firm Odebrecht signed a 13-year contract with AzCuba to manage a sugar mill in Cienfuegos province, beginning with the December harvest.

After an initial investment of $60 million, the management accord took effect almost immediately. Executives and experts began to inspect the plantations, looking to increase their output. In terms of factory efficiency, they are determining what technical improvements can be made in that sugar mill.

Reliable sources at APEX-Brazil indicated that “this first contractual experience” will not be the only one. It simply opens the road for new projects. They say that Brazil is interested in building 10 new sugar-processing plants.

This summary (incomplete, I stress) should include the fact that in less than a semester, in April 2013, the Economic Zone of Mariel will begin the first phase of its port activities. The port, 50 kilometers west of Havana, has been designed to replace ports with shallow drafts and to serve as an industrial platform for the reception of imports.

The zone itself will allow the manufacture of goods for domestic and foreign consumption. In other words, foreign and national factories of diverse products will be built there.

This megaproject has a price tag of about $900 million. Of that, $640 will be contributed by Brazil; the remainder, by Cuba. The initial agreement was signed by former President Luis Inacio Lula da Silva and ratified by his successor, who gave it additional possibilities.

Lula enabled and promoted the trade exchanges when he signed 10 agreements with President Raúl Castro, involving the two nations in a growing and mutually advantageous cooperative plan.

4 thoughts on “Brazil-Cuba: Full steam ahead”